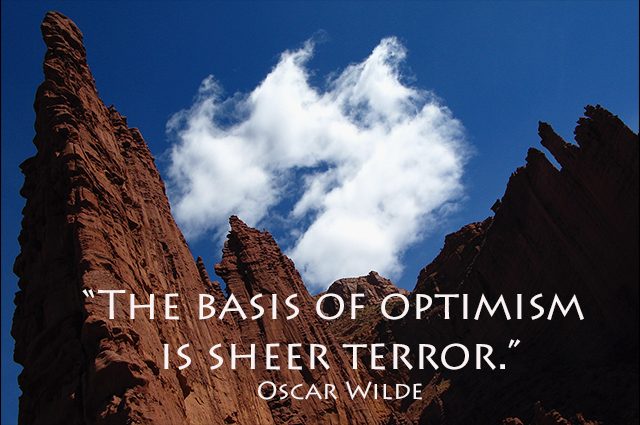 WTO 2018 audition tour, coming to you today from Rehearsal Room 3 at LA Opera. I’ve seen WTO alums in the LA Phil’s Music from the Magic Flute and LA Opera’s The Pearl Fishers over the last two nights, and now we’re getting ready to hear 65 singers in audition over the next two days. Let’s kick off #ASQoD*

“The basis of optimism is sheer terror.”
Oscar Wilde

An unusual pairing, it seems. But Wilde has something here. I never knew exactly where he was going with this quote, but I’ve gradually adopted my own interpretation. “Sheer terror” is universal; we only get ourselves into trouble when we pretend it’s avoidable. And only when we accept that terror as our lifelong companion can we be optimistic.

If you’re terrified by the uncertainty of what it means to carve out a life in the arts, of living the cruelly and relentlessly examined life, of making yourself vulnerable again and again… well, you’re only human. You should be scared. You’d probably be stupid not to be scared. So get over it and believe the best.

Show up again and again to pour your heart, soul, technique and training into singing in too-small rooms for too-tired panelists. The terror will change but may never go away. Make friends with it and move on to the optimism and possibility that it affords.

“And the day came when the risk to remain tight in a bud
was more painful than the risk it took to blossom.”
Anaïs Nin

*Audition Season Quote of the Day is a month-long series brought to you by Wolf Trap Opera.

What a photo! It says it all.