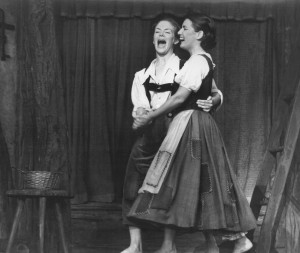 1977 was the year that the Wolf Trap Company reflected its more targeted focus in its name, and playbills and other written references began to refer to the Wolf Trap Opera Company. Young artists sang most featured roles in the July 1977 four-performance run of Humperdinck’s Hansel and Gretel. Roles were double cast, with each group of singers handling two of the four performances.

The production was on loan from the Met and was directed by Nathaniel Merrill and conducted by Franz Allers.  The Washington Post reported that “even for those [young audience members] of Hansel and Gretel age, it was worth staying up past bedtime.”

This was beautiful. Probably the best overall physical production ever on the Wolf Trap stage, and arguably one of the best sung. They really did themselves proud with this one.