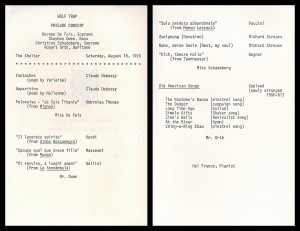 1979 was a year of transition for Wolf Trap Opera. It must’ve been a huge relief to see the company rebound after the 1978 hiatus. But it seems to have come back in two incarnations: the Wolf Trap Opera Company was the producing organization for performances at the Filene Center (Kiss Me, Kate and The Taming of the Shrew) with guest artist headliners and young artists in supporting roles; and the Wolf Trap Opera Training Program was the name associated with all performances which didn’t involve guest stars (one-act operas and concerts offered before National Symphony and other performances at the Filene Center.)

The bifurcation made some sense, but the young artist portion of the program didn’t quite have the punch it did when it did its own productions at Madeira or on the Filene Center stage. The training program was sort of homeless, and this didn’t shake itself out for another two years. Stay tuned!

Hi, the 1979 list is not complete. I don’t have it in front of me, but you are missing Sherman Lowe, Ed Toliver, and Linda Wall at least. But thanks for all this!