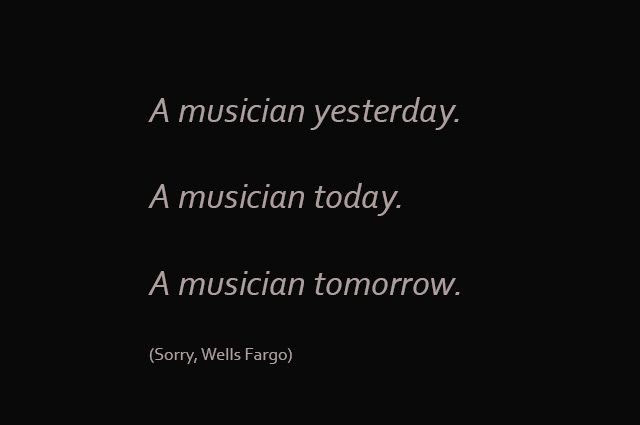 First, there was that unfortunate Wells Fargo ad campaign. I must say that I wasn’t at all surprised to see a financial institution valuing STEM occupations above the arts. It’s somehow perfectly logical in that world. But we did well by calling them on it. And it was wonderful to see that most of the response came from a place of confidence: there was more “How ridiculous” than there was “How dare they say that?”

And then, there was a different online firestorm in our little world, focused on the application form for the young artist program at a respected opera company. It seems that the required fields on their application included ones for height and weight. Again, this was called out. But the emotional tenor and magnitude of this conversation was different.

I must acknowledge that it’s easy to feel besieged. Opera – this form of expression that we love – is not treated kindly by the 21st-century American world in which we live. It’s debatable whether we’ve lost a significant amount of traction in these last decades, or whether the biggest different is one of perception driven by the media and the online cultural conversation. But no matter the reason, it’s tough to be a classical singer in a world that doesn’t appear to value the essence of what you do. And every time we think we see evidence that what we look like is more important than what we have to say as artists, the fire is stoked and the panic rises.

I want to say a few things that are more apparent from my perspective than from the young artists’.

First, sometimes a cigar is just a cigar. Could the presence of a weight field on an application truly simply be FYI, for ease of subsequent information gathering right after someone is hired? Yes. (And if you don’t believe me, try getting singer measurements for your costume shop in an expedient fashion…) Do paperwork processes sometimes suffer from inertia when there’s so much to do in running a company? You bet. I am at the forefront of this discussion, and I’ll admit that it was only a handful of years ago that we removed these application fields, and it was in the context of a practical overhaul that moved from paper applications to digital ones. Was there reason to suspect the company in question was discriminating on the basis of size? No. Just look at their track record. And finally, are the segments of our industry that insist on portraying opera as eye candy instead of substance actually winning the day? Well actually, no.

So, what was different? The inconsistency was called out as it should’ve been. As with the Wells Fargo campaign, we should search and destroy things that tell the wrong story. But that’s where the similarity ended. The amount of anxiety, angst and anger that followed was jaw-dropping if not surprising.

I’m empathetic. But I’m here to encourage all of us to calm it. When we see an incongruity that deserves to be addressed, we should do so. But let’s try to do so from a place of confidence, in ourselves and in our art. As much as possible, we should reserve our emotional and psychic energy for our real work. And to whatever extent you can, try not to be dissuaded or distracted by things that may be benign. The last thing we need is the best of the next generation’s vocal talent being discouraged by a box on a form. You’re bigger and better than that, and we want you to succeed.

Not terribly linear today, and clearly tldr. But my editing time has been preempted by audition application review. Speaking of which….

Today (September 7) is the application deadline for our NYC audition dates (October 6-9.)

It’s funny, but as someone retired from a lifelong career in science, I’d bet that, if a survey were done, that scientists are among the strongest supporters of the importence of the arts and humanities.