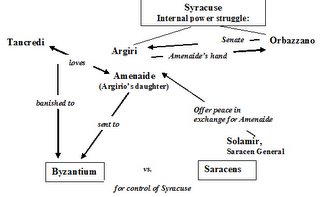 Once again, the Sunday New York Times was a source of amusement and amazement, this time in the form of James Oestreich’s diagram for Finta giardiniera. After all of these years of embarrassment over my anal-retentive plot and character diagrams, I can finally hold my head high, knowing I’m in distinguished company.

I’ve been working on my own diagram as I prepare a talk for Washington Concert Opera’s upcoming production of Tancredi. Other than the basic context of the famous showpiece “Di tanti palpiti”, and a vague memory of the fact that Tancredi has two endings, I knew little of the plot before I started digging in this week. I knew I was in trouble when I was still confused after re-reading the first 3 paragraphs of the synopsis, and the next pargraph began with “As the opera begins…”

Thus, the diagram. Funny, I’m not a “visual” person, but it’s tremendously helpful to plot out places, characters, and relationships. I even do it on the inside front cover of multi-generational epic novels, and my book club members mock me for it.

OK, I promised the story (scroll down on the link), for what it’s worth. Please keep in mind that the pitiful state of my longterm memory is legendary, so the details are sketchy.

From age 7-15, I took lessons with a lovely lady who was the only piano teacher in my very small hometown. When I was 15, she signed me up for a competition and assigned me a transcription of Richard Addinsell’s Warsaw Concerto. I worked hard, and I think I played the shit out of it. And all I remember was the scathing remarks from the judges about the unsuitability of the material for a serious competition.

I had always played the piano for pleasure, really. And I lived in an active but isolated musical environment. At that age I had yet to hear a concerto, or a

symphony, or an opera, for that matter. There was plenty about music I didn’t understand, and there’s no doubt that the Warsaw, in all of its unrefined, unrestrained, and populist glory, was neither Beethoven nor Liszt.

The only thing I knew then, though, was that I played that music for all I was worth, and it wasn’t good enough for the classical music snobs. Obviously, they formed a club for which I would never qualify. An experience that would be repeated multiple times over the next several decades, and, in spite of (or because of?) which, I seem to have become a fringe member of the musical establishment.

Audition Comments with a Twist

“It didn’t capture my attention at all…..it was so non-emotional.”
“It was very brave of you to be very ethereal and intimate.”
“It was like being at some horrible Sunday lunch with a child getting up to sing out of tune. It was a complete and utter mess.”

I waded into the American Idol morass a week or so ago, and as I was sitting here minding my own blogging business, I got a call from a friend who urged me to turn on the TV right away. Seems that the young lady who talks of her serious voice study was singing. (Actually, this is not the same one I referred to in my previous posting, but it’s all so confusing I couldn’t explain it if I wanted to. Lots of readers have tried to set me straight.)

No matter. What I just heard, though, was pretty sobering. And the comments above are not mine, but the Idol audition panel’s. The only thing that’s important here is that, bless her heart, she sang hopelessly and woefully out of tune. And she told millions of viewers that she studies opera. Public relations like this, we don’t need. Ouch.

Kim, could you draw us a diagram of the American Idol contestants? :)

I thought of you while watching this girl sing. Out of tune, undersupported at best -if she really is “trained in opera” it says a lot about the sorry state of vocal instruction these days. Plus, that lipstick was all wrong.

Kim, please don’t worry about the public drawing unpleasant conclusions from the opera-studying flat-singing American Idol contestant. Many, many, many more American Idol contestants who’ve had no vocal training whatsoever sing flat! (I think she sang in unsupported head voice – American Idol judges call it “falsetto” – in an attempt to impress by singing high notes, but not sound like an opera singer, which turned out to be a poor performance choice.) Personally, I think us opera-trained folks trying to sing pop are as ludicrous as the reverse (Michael Bolton, anyone?), unless we’ve done enough of successful pop AND opera singing to be respectable in both genres.

I was also really sad to hear Stevie sing last week. I had high hopes for her, since I did kinda hear her sing some operatic stuff for the Hollywood auditions. I couldn’t tell anything though over the talking. I did have high hopes for her…oh well.