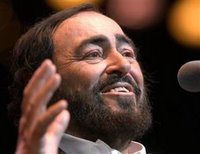 I’m usually not a sucker for pageantry, but I was pretty entranced by the opening ceremonies in Torino. Wish I had their scenic, costume, and lighting budget.:)

And if I can do anything as well at 70-something as Pavarotti can still sing, I’ll go to heaven a happy soul. The TV cameras were not kind to the shoe-black-dyed eyebrows, but damn can he still sing. Visceral, exciting. Not without warts, and down a half-step, to be sure, but for godsake, get over yourself!

If you haven’t taken the quiz (If You Were in an Orchestra…), hop on board. After reading about all the bemused bloggers who find out they’re all oboes, I was sure I wouldn’t conform. Shows how much I know. The kicker is that the real deal over at oboeinsight turned out to be a viola.

The Washington Post reports that last Wednesday’s Grammy broadcast was bested by the regular weekly installment of American Idol. I should probably be offended, for I guess I’m supposed to be a custodian of good taste. And this probably puts an unnecessarily Pollyanna spin on it, but I’m oddly encouraged. There’s something reassuring about shunning the untouchably professional music establishment for something far more raw, participatory… dare I say home-spun…

I had a surreal American Idol experience when I was flat on my back and under the influence of legal narcotics a couple of weeks ago. Lovely young woman walked onto the show and sang a few bars of Gilda’s aria from Verdi’s Rigoletto. It sweet in a teenage sort of way but it was irrelevant to the real opera world. Panel asked her for a pop song. Afterward, they told her that they didn’t like her pop stylings at all, but they thought she was a phenomenal opera singer. I hold her harmless, but Simon Cowell professes to know better. (And of course, I know he doesn’t, but still!)

As I promised, we’ll be back on the summer pre-production track next week. But I was reminded this week of a post I’ve been meaning to make on audition room “chattage.” So I’ll try to throw that in, too. 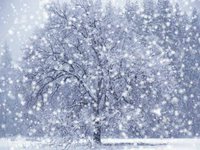 Meanwhile, the snow is piling up here in northern Virginia. Seized by the urge to go walk in it.

Thank you for posting these!

Excellent, the comments are back. Mille grazie, danke schoen, and merci buckets.

That girl on American Idol who sang that Verdi aria, her name is Heidi. She’slives on the North Shore of Oahu. Since, I live on Oahu, I wonder who her voice teacher is or if she even has one.