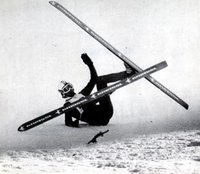 Somehow, the confluence of the Olympics, American Idol, and my bedside reading now makes sense.

I was reminded a few weeks ago that I hadn’t yet dug into Richard Powers’ Time of Our Singing, in spite of the fact that it’s been on my shelf now for a couple of years. I think it was a fellow blogger who inspired me to start reading (I’d give credit, but I can’t remember who it was…), and it’s been a long time since I’ve been this gripped by a novel.

Young professional singer Jonah Strom and his accompanist/brother are watching the Met debut of Jonah’s voice teacher. Jonah’s more nervous about his teacher’s vulnerability onstage than he ever is about his own. His brother asks “Why would anyone want her to fail?”

The response was so on-the-money that I must’ve read it ten times before moving on.

“For the excitement. The drama missing in their own lives. Look around. These people would love a good wipeout. Now that would be real opera.”

I was told when I started working in this business that opera is a blood sport. I occupy a tame place within its pantheon, but even from here I can see the wisdom of that statement.

Everyone loves danger. It’s why the tenors and the sopranos have mass appeal. Even if you know nothing about singing, it’s easy to understand how dangerous it is to sing so high… how small the margin between inspiration and ruination.

Which of course, brings me to American Idol. I’ve been told that the young lady whose audition I happened upon a couple of weeks ago has made it to the final 24. Good for her. I think I’m going to try to start watching. I’ve never seen the part of the show where they actually winnow down the finalists, and I’m curious.

All Marketers Are Liars…

…But Great Marketers Tell Stories We Want to Believe.

Also reading Seth Godin’s fascinating book on marketing. Finding myself obsessed with this subject lately, even though it ranks way up there with fundraising in my list of the least favorite aspects of my job. Having a hard time changing gears in general – the fall and early winter were full of music. Now I’m seeing spreadsheets and ad copy in my dreams (no, actually, those would be nightmares), and in spite of the fact that such things normally appeal to the anal-retentive side of my nature, I’m having a hard time going to the dark side.

Involved in some interesting and promising marketing discussions, most of which I probably won’t go into here because our Director of Media Relations not only reads this blog, he forces me to write it. (Kidding!!!!)

10:04pm. I’m writing while watching men’s figure skating. Canadian Shawn Sawyer just did his free skate to Richard Addinsell’s Warsaw Concerto, and I nearly fell off the sofa. This piece of music shaped one of my formative experiences with “classical” music at age 15. I had all but forgotten the whole humiliating event, but it just came crashing back. I’ll recover in a day or two, and I’ll spin out the story.

Kim, on your American Idol comment, the young woman who sang Caro Nome, and got the praise from Simon (she sang in tune, so he was impressed) did not even make it to Hollywood, much less the final 24. So your source is mistaken – there is another young woman, I think from Boston, classically trained, who likes to sing opera, but also loves to sing blues, who ISin the final 24. They’re both blondes, so the error is understandable.

Yep, Heidi from Hawaii didn’t make it to the Hollywood round. Stevie Scott who is trained classical for 7 years made it into the top 24 though.