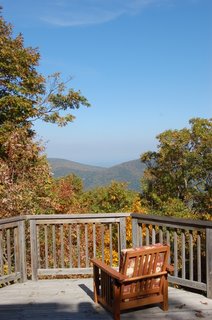 Took a couple of days last week to visit a friend’s house in the Blue Ridge mountains. It wasn’t long enough to qualify as a vacation, but it allowed me to screen the first 300 applications with the view at left.

Back home now, and just finished listening to the first 120 demo CDs. Our audition process doesn’t require audio samples, but singers who don’t clearly meet or exceed our suggested profile are encouraged to considering submitting a demo containing 2 arias.

How Important is the CD?

We treat the recordings in one of three ways.

What Do We Listen For?

Objective things: intonation, mastery of languages, the right notes at the right time. If a recording has a negative impact, it’s usually because the singing is not on pitch, the delivery of the languages is badly executed, or the rhythms and pitches are poorly or incompletely learned. On a more subjective level, if the previous criteria are met, then I’m listening for phrasing, musicianship, and general artistry.

One thing that’s really not discernable is vocal timbre or size. Some recordings seem to have been made in stairwells or large bathrooms (not really, but their very forgiving 5-second reverb makes it seem so), and some appear to have been made with a cheap microphone in a practice room. This variation in acoustic makes it ill-advised to do much speculation about the weight and color of a voice and whether or not the chosen repertoire is a satisfying fit.

This might seem odd, but I prefer CDs that contain two different selections recorded on separate occasions. Somehow it’s easier to triangulate (well… I guess you can’t triangulate without three points, but you get my drift…) and get a real feel for the voice when you can hear it in a couple of different guises. If there’s a single very flattering acoustical environment (or a single raw, dry acoustic) on the CD, I tend to mistrust it. Don’t know if this makes any sense…

This is becoming a bigger and bigger issue with the availability of more affordable digital equipment. I’ve received a few professionally issued and mastered CDs this year, and I can honestly say that it makes absolutely no difference for our purposes. It makes for a pleasant listening experience, but to be honest, the roughly 20 hours I spend with these recordings are not a predominantly aesthetic experience. I’m doing fact-finding, and I don’t need extremely sophisticated sound reproduction in order to do that.

Now, having said that, please don’t send recordings that carry obvious distortion. I’ve heard 5 so far this year that break apart entirely in the upper half of the decibel and frequency range.

Enough. The second deadline (for Houston/San Francisco/Cincinnati) just passed, and the flurry of online submissions has slowed down. Time to get some sleep and get ready for the next wave. I’ll summarize the screening process next time… my absolute least favorite part of the whole autumn. I’m such a bleeding heart that I have trouble turning anyone down – I think every year that it’ll get easier, but it never does…

It’s nice to know that you don’t listen for tone or quality of instrument on the CD… so often I feel like the recording doesn’t capture the right sound!

Actually, that’s why I didn’t end up sending in a recording with MY Wolf Trap app… Here’s hoping that Cincy isn’t as popular a region as Chicago!