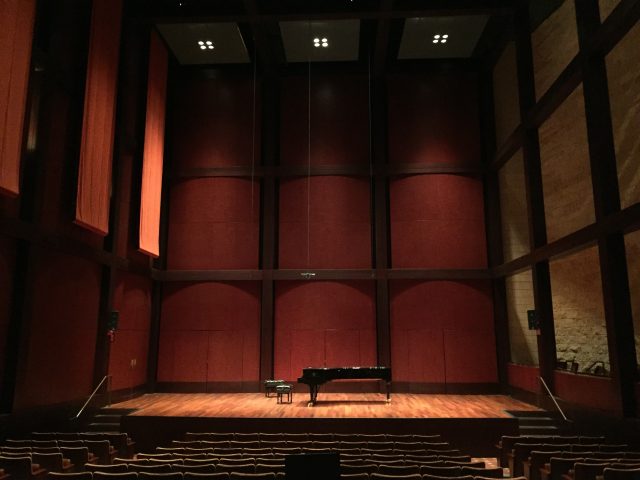 We were preceded in beautiful Werner Hall (above) by auditions from Des Moines Metro Opera, and as soon as we left, Opera Theatre of Saint Louis moved in. ‘Tis the season.

This week, monologues (required for Studio Artist auditions) included a great assortment of excerpts from playwrights ranging from Tennessee Williams to Neil LaBute, movie monologues from The Grinch and Remember the Titans, and bits from TV scripts including Scandal and The New Girl.

And for the first time in years, a Studio Artist candidate chose to start his audition with his monologue instead of his aria!

Free the Knee, but Banish the Button

We’re a pretty relaxed audition panel, much less specific than most in our expectations for attire. But we agree a bare midriff in an audition is a bit much. Discuss.

We had a gentleman audition in dark wash jeans and a button-down shirt with blazer, and we couldn’t quite decide on that one. General consensus was that he looked pretty polished, and the dark jeans didn’t scream informality. But if that is the bottom threshold for the guys, what’s the equivalent for the ladies? We decided that it must be skinny pants with heels and a dressy top. And we saw a couple of those today, with mixed success. It can really work for you if you have a sense of fashion, but it’s a lot harder to pull together a look with that many components than it is to find a great dress and accessorize it.

Usually by now I’ve posted a dozen or so operas that have ended up under serious consideration for the upcoming season, but this has been a different kind of year. No fewer than 30 operas have rotated on and of our “short list,” and the field is still wide open. Exciting and terrifying. Stay tuned.