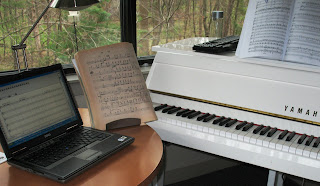 It’s just me and my workstation. And it could be far worse.

The last several weeks have been far more fragmented than I was equipped to handle. My hopeless addictions to multi-tasking and over-commitment may be unbreakable. And so I’m surprised when I’m capable of even brief episode of single-minded focus.

The woodwind and brass parts for Verdi’s Un giorno di regno are unreadable. It’s naive to

expect much else of an opera that has probably only been produced a few dozen times since the 27-year-old Giuseppe wrote it. We’re staring at messy sheets of music that look like 10th-generation xeroxes of the original music from the 19th century. If we hand these parts to the wind players, the orchestra rehearsals will be inefficient (read: chaotic), and the only way out will be to add rehearsal time and blow out the budget.

What’s the alternative? Spending 3-4 hours a day this month with my computer, Finale software, and digital piano. By the end of the month, we’ll have brand new wind parts for the Giorno orchestra. I’ll be behind on a host of other issues, but at least I’ll have something to show for it.

It felt like a harsh sentence, but I’m surprised how comfortable it feels to go into the zone. I’ll tire of it before it’s done, but for now, it’s oddly comforting to focus on one thing at a time for hours at a time.

Sure hope you’re getting a break on the rental!!

I’m not in your orchestra, so I can’t thank you in person, but I CAN … and will … thank you this way!

I have gotten quite weary of the time wasted when parts are either unreadable or full of errors. Sometimes it’s impossible to avoid it, but when you do something like what you’re doing, it is greatly appreciated. At least by me! (Of course perhaps the orchestra will now grumble about not getting that extra rehearsal, but so many of us do love to grumble so you are doing people a favor, eh? :-)