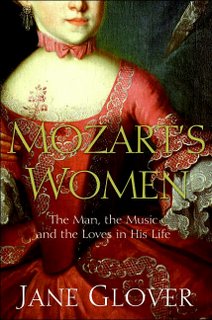 The inescapable Mozart mania will be heartily embraced by some and barely tolerated by others who resent the flood of words and notes that will be unleashed on the birthday boy this week. As happens so frighteningly often, I find myself in the middle. (More on that in a later post.)

Heard Jane Glover speaking on NPR today about her new book on Mozart’s Women. Haven’t read it but plan to. (I have a serious backlog of Mozart books that I’ve promised myself to get through this year.) Wolfgang’s onstage women were strong-willed, hotblooded, and downright smart in a way that all but disappeared in 19th century grand opera. The women in the composer’s life were a vivid presence, and his relationships with them seemed to be significantly less destructive than those with his father and his male employers. (Sorry if I’m pulling the feminist card – I’ve recently been reminded how freakishly male-dominated the arts blogging scene seems to be, and I’m overcompensating.) Anyway, looking forward to reading Jane’s book.

Does his music measure up to the hype? More often than not. I’m repeatedly struck dumb by the last 5 operas in particular – Figaro, Giovanni, Cosi, Flute, Tito – in spite of my own personal overexposure to Mozart’s stage works. (I’ve been involved in 34 productions of 11 different Mozart operas in the last 24 years.) Tim Page got most of it right in today’s Washington Post article, particularly about Figaro – “I marvel anew that one of my fellow human beings actually managed to pull himself far enough out of the mud to create this miracle of order and civility. Yet it’s such a friendly masterpiece — warm, funny, forgiving, even downright silly — and if there is an important universal emotion that is not explored, musically and dramatically, over the course of the opera’s duration, I don’t know what it is.”

I only take serious issue with two of Mr. Page’s corollary points. 1) “…almost any third-year piano student can read through the Mozart sonatas” (I taught piano lessons far too long to buy into this one:), and 2) “Charming composers such as Vivaldi and Telemann offer a good deal of pleasure but usually — usually — not much else.” We’re out to prove this one wrong in just a few months.

Shuffled and slightly edited to preserve anonymity. And I’ve been reminded that there are shop-talk terms in these comments that could stand to be defined. I promise that the next installment will include the beginnings of a glossary.

And just in case you think the audition panel always knows what it’s doing:

These comments are interesting & insightful; thank you for sharing them.

Oooh … love reading these comments! I wonder if singers will be reading them and trying to guess which one is them? (Or do you hand out your comments?)

Being on the audition panel side (for instrumentalists only, mind you) I’ve found it fascinating to see how different each panel member can hear.

On a different topic you touch on; Telemann gets far too little recognition. Poor guy.

It seems like a) you don’t know much about singing, b) you have little empthy for singers, c) you’re pretty self-important. You seem like you don’t like singers very much. Are you in the right business?

a) Maybe I don’t know as much about singing as you do.

b) I adore singers, actually.

c) This is the first time I’ve called self-important (at least to my face). You learn a lot by blogging.

I do somehow believe I am in the right business.

I’m a WTOC veteran, and can promise you that Kim is the best leader one could ask for.

Are you a singer who wasn’t offered a spot at WT?

Or you aren’t a singer. In that case, who are you to say someone knows nothing of singing?

Take a look at the singers to come out of WTOC in the past ten years. Or just go see Flute at the Met and hear them yourselves.

Grow up, find love in music, get a good teacher, or better yet, get a new career.

It’s pretty obvious that Ms. Witman knows what she’s talking about, and loves it as much as she loves the singers. Judge by the singing at Wolftrap, by the status that company has earned, by the fact that she spends so much energy to keep track of every one of us, and by the existence of this blog in the first place.

If you’re going to write flamebait, try not to contradict the demonstrably obvious.