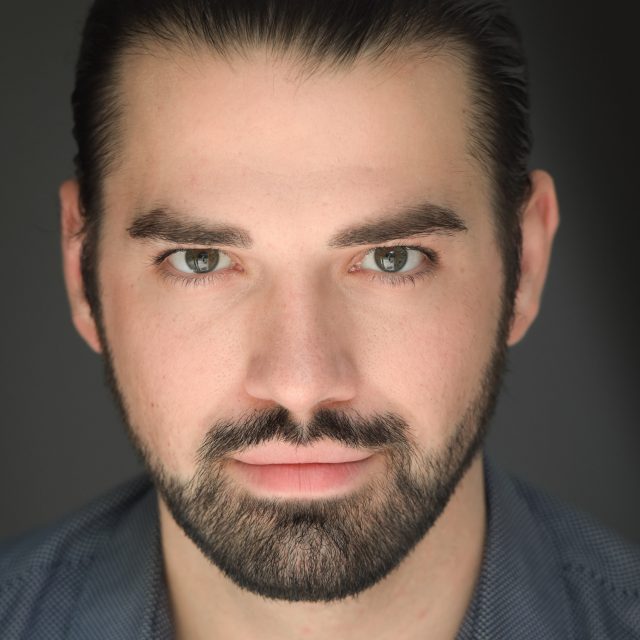 Mackenzie Gotcher makes his Wolf Trap debut as Cavaradossi in a new production of Puccini’s Tosca at the Filene Center on July 14, 2017.  He’s a self-confessed “dark and stormy” nerdy tenor who loves doing character research and discovering rare operas!

What aspects of your role in this summer’s opera are natural fit with your personality and/or which aspects are a stretch for you?

I immediately identify with the ardent and passionate side of Cavaradossi. I tend to approach most things with a similar kind of gravity, seriousness, and intensity, often to a fault. Some of my friends even refer to me as “dark and stormy” for that reason!

Cavaradossi is much more than ardent, though – he also has a charisma that is effortlessly charming and almost playful. We see this side of him as he muses in his Act 1 aria Recondita armonia, in his interactions with the Sacristan, and through portions of the Act 1 duet with Tosca.  But this more playful part of Cavaradossi is most unlike my natural instinct.

I think my favorite part of preparing a role is the research that goes into finding interesting sources that can inform the way I construct the profile of the character.  For example: The drama of Tosca hinges on its setting in a specific time period during Italian, French, and European history. In order to present credible characters, they must be informed by knowledge of the political, religious, and social customs.

The opera is based on a play (La Tosca) by the French playwright Victorien Sardou – a sprawling five-act drama including characters and intricacies that are not suitable for the operatic art form. In forming my ideas for how to portray Cavaradossi, I find it very helpful to inform Puccini’s operatic Cavaradossi with Sardou’s idea of the character. Though it might sound like tedious work, I really enjoy finding specific details with which to craft a credible character.

I think I could safely say that I have many dream roles, and certainly one of them is Cavaradossi! However, I have a special place in my heart for some music outside the standard repertory.

Ruggero Leoncavallo (the composer of the famous opera Pagliacci) was actually ahead of Puccini in having the idea to write an opera on of La bohème. But Puccini’s came out first and was an instant success; many people forgot about Leoncavallo’s version over time. Leoncavallo assigns the role of Marcello to the tenor; it’s certainly one I would love to sing someday!

Another Italian composer, Riccardo Zandonai (known for his little performed work Francesca di Rimani), wrote his own version of Romeo and Juliet (Giulietta e Romeo).  Alfredo Catalani’s opera La Wally is known for the heartbreaking aria, Ebben! ne andrò lontana, has a tenor role that I would love to sing as well.

I even discovered a composer with whom I was unfamiliar while doing my research for Tosca. The story goes something like this: Puccini convinced the publisher Ricordi to obtain the right to base an opera on Victorien Sardou’s La Tosca play, but Sardou was not convinced that Puccini was the right composer for the task as he was still fairly young at the time. After negotiations reached a bit of a standstill, Ricordi gave the compositional task to Alberto Franchetti – a composer of many stunning operas. Franchetti struggled with the composition and eventually abandoned it, but Puccini returned to the story some time later. (And aren’t we glad he did!)

What’s been your most memorable live music experience as an audience member?

I think one of the most vivid memories I have as an audience member was seeing Carlisle Floyd’s Of Mice and Men for the first time. I was in a young artist program at the time and singing in the ensemble for the production. I knew that I wouldn’t be able to see the show and couldn’t experience the drama in a substantial way as my character didn’t enter until the very end of the show. So I went to my colleagues’ cover run [a run-through of the complete opera by the understudies]. The intensity of Maestro Floyd’s music and the dark tragedy of the story met in a way that was instantly deeply meaningful to me, and I will never forget it.

I recall being in an apprentice program several years ago singing in the chorus for Die Fledermaus. Our Maestro was looking for specificity and intention in the way we were delivering the chorus music to the point that he began dancing around the rehearsal space as he conducted. One of the things he said to us in that rehearsal has stuck with me – that those who sing opera will never be greater than the music they sing. The music we sing will continue to be sung by great singers for years after our names are forgotten. I think this perspective demands humility and generosity from the artist, and I think those qualities are the ones that endear an artist to his or her audience.

ANY chance Tosca will be streamed later? Out of town that Friday and hate we are missing it.

Unfortunately, no. We are only able to record and stream operas from The Barns. Sorry that you have to miss it; hope we’ll see you next year or at another show!

Thanks for the quick response. Will definitely be at the Barns in August and LOVED La Pietra last night. Thank you.

Loved reading your in depth comments.

Especially loved your last comment about the greatness of the music. It shows that you already have the humility and generosity. Can’t wait to see you in Tosca!