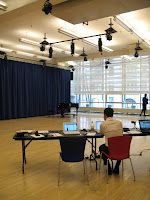 Monday was spent listening to candidates for our studio, hearing singers who are doing undergrad study or just beginning a graduate degree. This is tough stuff. Not because these kids aren’t talented, but because it takes an entirely different kind of listening and discernment. My hat is off to those folks in university and conservatory who regularly listen to 18-year-olds and have to make any kind of judgment call about who gets into a program, who gets scholarships, etc. It too often feels like a crap shoot at this early age.

Give me a day or two, and I’ll respond to the comments that Sunday’s post generated. I’m struggling with some significant mental fatigue and trying to reserve my few moments of clarity for the auditions themselves.

Some things are falling off the Longest Short List; other things rising toward the top. Here, the newest version. But don’t hold me to it.

This list is for The Barns only. The Filene Center is an entirely different animal, with its own very short list. But that’s a story for another day.

Where Do These People Come From?

The second in a series of regular postings listing the universities and conservatories from which this year’s auditionees hail. If you’re considering a career in opera, and you’d like to know where the schools are, this might be of interest.

In each city there are a few people who travel from other parts of the country because they have a date conflict with our auditions in their home area (for example, someone from Rice University traveling to New York because the Houston audition date was inconvenient). I’m not listing those outliers, but rather the schools that line up geographically with each part of the country we visit. I’ve put an asterisk by the ones that show up with more frequency.

From the Seattle auditions:

From the Chicago auditions:

From the New York auditions:

(Although many people travel to New York to audition, this list focuses on the institutions in New York and New England. I’ll cover the mid-Atlantic and southeast later.)

Young Artist Programs
These aren’t geographically limited to the northeast. This is a full list of the YAPs represented by this week’s singers.

Hoping to break through this wall of fatigue any minute now. I was counting on the 2-mile commute from the hotel to the audition site to energize me, but it hasn’t exactly kicked in…

Poor King Ted. He’s been on the short list for what, about 10 years now? Isn’t it time to let the poor guy get on stage? :)

Ah, King Ted. I think he might just be there to keep me company. Maybe someday it’ll be his turn if he just hangs in there!