I’ve been meaning to link to this for a while: a post on Sequenza21 titled The Conservatory. It’s on my mind these days as we listen to auditions for the Wolf Trap Opera Studio. I’m one of those oddballs who believes that (for most people), conservatory is not the best choice for an undergraduate. We heard a range of undergrads today (plus a few first-year grad students), and we heard some wonderful young singers who chose to do their undergrad work at universities and liberal arts colleges. Guess I’ve just seen too many musicians get burnt out by the time they get their B.M.

Like all advice, it’s not standard issue, and it’s not as simple as it sounds. There are those 18-year-olds who identify so strongly with their art that they can’t imagine any other way spending the next 4 years other than being immersed in it. And that’s perfectly fine. These paragraphs are for the rest of you – just so you aren’t necessarily harming your potential career by waiting until grad school for conservatory. 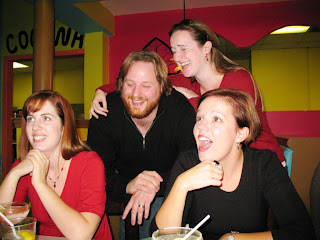 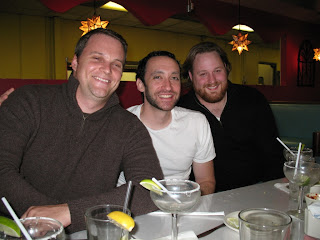 It was great fun being in Houston, visiting with all manner of friends and colleagues. I met another regular reader and commenter on this blog. It’s a small world and getting smaller all the time.

Studio auditions include a monologue. It’s the rare singer who can communicate a clear sense of him/herself at 21 or 22. Stepping away from the technique and into the mother tongue for a minute or so gives that singer a chance to come alive for us in a different way.

For the opera audition committee, it’s the equivalent of a palate cleanser. A theatrical sorbet. I think I enjoy these diversions a little too much – particularly the church camp and hot dog man excerpts… 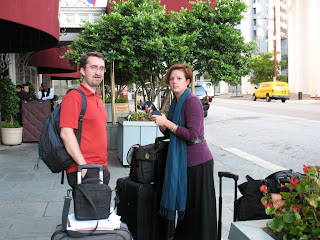 Off to La La Land!

We’ll be in Los Angeles on Tuesday. The Southwest Airlines counter is decorated for Halloween tonight, and a festive spirit rules at Hobby Airport.

Greetings! I auditioned for you today, and I just wanted to comment on the Conservatory vs. University. I started out my degree at a small conservatory in Boston (about 500 students), and after my first year decided to leave in order to attend Loyola. And I’m so glad I did! I enjoyed the conservatory, but after attending a performing arts high school I started to feel a bit claustrophobic. The fact that I was so completely immersed in music and nothing else made me start to question whether I really wanted to be a singer or if it was just all I knew.

Once I transferred I was able to take classes in other things that interested me (psychology, philosophy, religion, history, etc) and I feel that it really served to strengthen my desire to be a singer. I also feel like it gave me a better basis for researching a preparing roles.

I am applying to Grad school, and I really feel like I am ready to head to a Conservatory, but I don’t think I was when I was 18, and I agree that most students aren’t.

P.S. I literally heard about your blog yesterday, and this is my first time reading. Thanks for the links, I really enjoyed them!

I adore that you ask for a monologue for the Studio. I know at my University, acting classes were not a requirement for any of the music degrees, not even the artist or performer’s diploma. I saw plenty of musically talented singers graduate that would not succeed in the acting-infused world that opera is becoming.

I think it makes for a more well-rounded opera singer and much more interesting to watch. I started out in musical theatre and while opera singers don’t need to know how to dance their socks off… being able to dazzle with voice as well as acting abillity is increasingly attractive to the audience.

Props to you! Safe travels to LA – say hello the ocean for me!