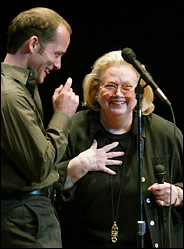 Master classes are many-headed monsters. I’ve seen very few that deliver significant results and even fewer that purport to be about what they say they are. But according to Sunday’s New York Times, it sounds as if Barbara Cook is using this format to do important work with young singers.

The master classes that are really star turns for divas (or divos, thank you very much) or other ego-driven individuals are often destructive. I won’t go so far as to believe that they’re malicious in intent. But they often revolve around vocal/technical issues that are unwisely addressed in 15 minutes in front of hundreds of people. And there are hidden agendas that are counter-productive, to say the least.

Ms. Cook tells singers that “Your own humanity is your pathway to artistry.” But any performer will tell you that allowing one’s humanity to speak through the music is threatening and risky. And most of the training that we foist upon young singers is designed to reduce risk. As it should be. After all, there has to be a foundation. But somewhere, somehow, that essential risk must be honored.

She tells them “The place that seems most dangerous is exactly where safety lies.” In futher elaboration by Times writer Charles Isherwood: “…self-exposure and the abandonment of technical propriety, scary as it was, was the surest, the best, maybe the only way to communicate with an audience.”

It’s easy for us to see this phenomenon in opera’s stereotypical and often dysfunctional diva culture. (Those same divas who insist on torturing students in master classes:)) These are people who live on the edge, who thrive on risk, danger, and confrontation. They strike fear in the hearts of mild-mannered administrators such as myself, and they find worthy sparring partners in the form of strong-willed impresarios. They have thrived in opera’s culture almost from its beginning.

We, the audience, crave their potency and intensity. The art form itself consists of simple ideas, emotions, and truths that are so saturated that they be stretched out over a 3-hour opera and still speak to us. Our artists cannot pale beside this vivid material. The opera culture has always welcomed these larger-than-life creatures, and they have found a home there.

There will always be divas and sacred monsters in our business. But as we strive to bring opera into the mainstream and to allow the education of our next generation of singers to be less haphazard (dare I say more thorough and linear…) we welcome a higher percentage of aspiring performers who just may be slightly less neurotic and self-destructive than many of their predecessors. Are we selling these young artists a bill of goods? We say, “Be respectful colleagues, run your singing business conscientiously, moderate your lifestyle and take judicious care of your instrument, be a ‘well-rounded’ person.” When was the last time you paid over $100 for a front orchestra seat to hear a careful and cautious performer?

I’ve veered slightly past my goal in order to make a point. Do I want the performers of tomorrow to be destructive to others and dangerous to themselves? Of course not. But we should lose no opportunity to remind them never to lose their connection to that part of themselves that is so potent and laser-focused that it will speak to someone in the back row. We all have it somewhere inside us. In the 21st century we’re all increasingly good at tamping it down. Technology and mass culture are its enemies. Live performance – the opportunity to allow another person and his connection to the music to touch us – will keep us connected to our humanity.

Up on the Roof

Many years ago, when we were younger and climbing on the roof every December seemed like a reasonable thing to do, we unwittingly established a Christmas decoration tradition. A few years ago we decided to take a year off, and by the week before Christmas we had strangers knocking on our door, making sure that we were all OK, that no one in the house was sick or anything. Why else would we miss putting up our lights?

Anyway, the weather hasn’t cooperated this year. Cold, windy, and snowy since Thanksgiving. But yesterday found us up on the top of the house, grumbling just a little. Shoveling and sweeping snow off the roof before fighting with the damn strings of lights. Bah humbug.

Today my back aches but I know why we did it. No matter your religious, metaphysical or philosophical perspective, it’s hard to deny that as we head toward next week’s solstice, we need light. 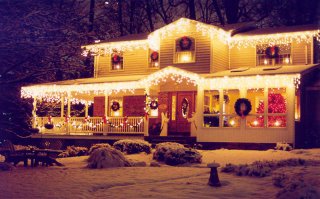 LOVE your blog – I don’t know how far word has spread, but all of us at CCM read it almost on a daily basis. Thank you for giving singers such a wonderful resource!

I’m wondering if you have heard about nearly famous and barely pseudonymous Chicago Canadienne‘s hiatus from blogging. She explains that she feels overexposed, and that every note she sings is now subject to the criticism of every reader. She is considering starting a truly anonymous blog instead.

There is some risk in non-anonymous-opera-singing-blogging (say it 5x fast), just as there is in blogging about any workplace. But with this news about Canadienne, even those of us who try to keep a completely non-offensive blog are feeling uncomfortable. Could you shed some light on this issue?

As an administrator of such a high-profile company and as a non-anonymous blogger, how do you feel about singers who blog? Is it the career liability we worry it is? Have you ever heard of a singer being fired for their blog?

Thanks again for your great blog, and keep it coming!

Can’t believe I missed this post! It’s so important, and it’s something I’ve been wondering about myself lately.

Does the audience really want a milquetoast, safe, always 100% consistent performer? I’m not saying we shouldn’t perfect our technique and our diction, but our “safe”?

And are there directors and conductors (why does everyone forget the conductor?) who really want someone vocally secure enough to really give something back, to really take artistic risks? Secure enough in who they are and how they sing to make them laugh and cry and sing along and come back for more? Where is THAT?

The whole singers blogging thing really got to me, and I “resolved it” (if only temporarily) by resorting to an alias. But I have only the illusion that it could ever be any kind of shield, that people don’t already or won’t eventually know who I am. I just insist that if you read my blog, and you know/guess who I am, you respect my (weak ass) attempt at anonymity.

But anonymity doesn’t mean I am “safe”. And I don’t want to be safe if it means boring or predictable! I want to be hired by directors and conductors and administrators who want ME, who want WHAT I HAVE TO OFFER, who want ALL OF IT. I give 100%. If someone doesn’t want that, then I don’t want to work with them. Period.

Diva shmiva. I’m so sick of “Divas”. Shoot! Anyone with some bling these days is a “Diva”. I’m not one and I don’t want to be one or even be around one. At least not what is currently known in popular culture as a Diva. Enough already.

What I want to know is, does anyone want a vibrant, individual, creative, cooperative, collaborative individual who sings and creates characters on stage in opera roles?

Does anyone still want THAT? (I’m betting they do. So I’m going to start running and let everyone else just catch up.)