Words to live by. Or at least I’ll try.

Last week’s news that Canada’s Radio Two is making an all-too-common cutback in classical music reverberated around the blogosphere. I know that the right thing to do is to react with disbelief and indignation. But (and I probably shouldn’t admit this), that’s not working for me any more.

Radio 2 came up in a conversation on Friday evening with RB – a terrific Canadian musician and brilliant guy who was playing at The Barns. We all shook our heads and tsk-tsked, then RB simply acknowledged that no matter how we resist it, this landscape is changing. And we should simply remain agile.

Why was it such a relief to have an esteemed colleague move beyond the griping?

Weeks ago Roger Bourland devoted a brief post to his Nüvi . The analogy stuck, and I’ve become determined to live my life According to Garmin. That little GPS device manages to be simultaneously meticulous and flexible. After barking demands to “turn right,” “turn left,” if her directions (I love/hate that Roger’s Nüvi is a she) aren’t followed, she simply says “Recalculating.” And starts over from wherever she is. No recriminations, no guilt, no fuss. I aspire to this.

OK, I’m a nerd. I’ll even admit to my newest addiction, the Neuromarketing Blog.

Over at Musical Perceptions, Scott summarizes a new study of the neuroscience of jazz improvisation. Now don’t tune out… it’s not as dry as it sounds. Basically, the part of the brain that is associated with self-censorship and inhibition is (not surprisingly) lacking in activity during improvisation.

I’m also fascinated by recent studies that show the same electrical activity in musicians’ brains when they’re just thinking about performing as when they’re actually doing it. Don’t ever doubt the value of mental practice. I once learned an entire Wagner opera (well, sort of… well enough to play rehearsals) on a plane.

Why is the hour we lose for DST worse than, say, the hour we lose en route to Chicago? I sorely missed my hour of sleep, but was happy to greet the crocuses (croci?) and maple tree buds in the front yard. 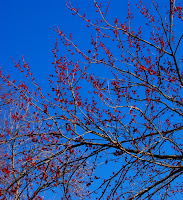 I’m off to New York on Tuesday for the premiere of the Musto/Campbell Bastianello and Bolcom/Campbell Lucrezia with the New York Festival of Song at Carnegie Hall. Can’t wait.

Because when you go to Chicago (West), you gain and hour (get to wake up an hour later). And when we go to DST, or go from Chicago to the east coast, we lose an hour (must wake up an hour early).

Ah, yes. Coming home from Chicago is what I meant. I do love flying west. It’s coming back east that I dread.

See, the DST made me even too stupid to ‘splain this correctly! :)