Before I get to the main topics… this photo from last Friday evening’s Discovery Series concert with the Parker String Quartet. 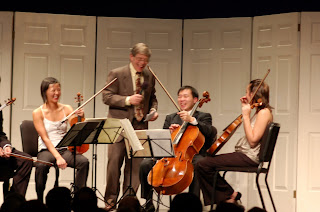 Rich Kleinfeldt, our onstage host, is enjoying his mid-concert Q&A with the artists. I think I snapped this photo right about the time Rich was asking violinist Karen Kim about their New Music/New Places initiative. They performed at Red, Hot & Blue (in D.C.) last August, and we wondered if it was tough to play to a bar crowd. This led to some discussion about the World’s Largest Six-Pack – an important topic for both Rich and Karen, Wisconsin natives.

I’ve always been curious about why companies require letters of recommendation before an audition is granted. I understand that they provide valuable input if a singer is under serious consideration, but many times I have asked my poor, sainted recommenders to jump through hoops of letters and forms, only to be denied an audition in the end. When I apply for day jobs in the business world, I am asked to provide a list of “professional references” along with contact info. That way, if the company is interested in me, they can contact some of the people on my list for a written or oral recommendation. Is there a reason why the opera world doesn’t operate the same way?

Our “regular” applicants for our roster of Filene Young Artists require no letters of recommendation. We’re one of the few YAPs that don’t require these letters, and we get regular notes of thanks from colleagues because of it. So it wasn’t without a lot of thought that we decided to require letters for our Studio applicants.

By the time a performer is a good candidate for our company, s/he usually has ammassed a small body of work collaborating with conductings/directors/coaches/mentors whose names are familiar to us. A look at the resume will reveal a handful of people who could give us their impressions of the artist in question. The opera world is a small place – the majority of the singers we hear in our regular audition tour are folks we have either heard before or heard about. (Very often in a good way.) And finally, by the time these singers have finished a handful of degrees and a YAP or two, and/or sung roles with small companies, their auditioning chop usually are a reasonable approximation of their performance potential.

Not so with singers in our Studio demographic. We have asked to receive a few words of recommendation from mentors in their academic environment so that we may use this information to fill out what is a slightly murkier picture. The resume itself is not as useful in this demographic, for often the performance experience is more an indication of the number and type of opportunities available in their academic environment than it is of their talent and/or potential. And the 10-minute audition isn’t really as strong a litmus test as it is for the more experienced folks. (And the audition format isn’t a flawless indicator even at the higher level.)

All of that said, I’ve read and written enough letters of recommendation to read between the lines. Very often, what isn’t said is more telling that what is. But in the case of the studio, we’re looking less for a testimony of the student’s work and more for a professional opinion of the suitability of the singer for this type of program.

I can’t wait to hear what you have to say about the Edirol MP3 recorder! I have wanted one to record lessons, etc. with for a while, since the R-9 came out, but haven’t been able to get real feedback from a classically trained vocalist.

I adore my Edirol R-09. I’ve been through multiple DAT recorders and mini-discs. But nothing beats this. Easy to use, records in high-end WAV format or compressed MP3, and downloads instantaneously to your computer (and subsequently to the iPod).

And if you’re feeling particularly down on yourself that day, there’s a nifty little reverb option that plays your recordings back with varying levels of acoustic sweetening. :)

Not Exactly a Tough Crowd

Played my recital for the first time yesterday in Arlington. For a wildly inappropriately supportive audience. Gratifying if a little embarrassing. Will be doing the same program in Pennsylvania in a couple of weeks.

A few observations about my recent return to the solo piano repertoire:

I have to look at the music even when I don’t need it. I’ve spent 40 years playing the piano while I look at any number of other things – the music, the conductor, the singer, the instrumentalist I’m accompanying. When my eyes catch a glimpse of my hands on the keyboard, my conscious mind freaks out. Omigod, what am I doing? How do my hands do that? What if they miss?

I am hyper-aware of the audience. And not in a good way. When I speak to an audience, I find myself constantly reading their reactions and adjusting my talk accordingly. On Sunday, I found myself doing this with the music. And sometimes veering dangerously far from my original musical intentions because I felt I sensed boredom or inattention.

I lapse too easily into faux pianism. I spent sufficient time wood-shedding some difficult technical stuff. By the time I got to this weekend, I could almost always nail these passages in rehearsal, at a variety of speeds, in a variety of conditions. But I have just played too many opera reductions. In performance, I tended to sacrifice some accuracy for an approximation of an overall musical goal. I should be able to reconcile the two, but I had a lot of trouble resisting temptation, especially in the big 19-th century rep. Playing fast and loose with chord voicing, arpeggio configurations, and pedal technique, even when I didn’t have to.

I made my peace with Rachmaninov. I’ve spend 35 years running from Russian music. Played 3 Rachmaninov preludes (the easiest ones….) and enjoyed the heck out of them.

I had a marvelous time.

I got an audition, but I’m just wondering for future reference.

How are the feedback responses coming? I got my request in on Jan. 1st, and haven’t gotten your response yet. Are you going in order of request received or waiting until you have them all written to send them out? Thanks again for providing this feedback, I’d love to have your comments so I can incorporate your thoughts into my upcoming auditions. Congratulations on your piano recital! Glad you are making music again! Kind regards,
Tamara Regensburger

Way way behind on many many things, including feedback responses. The goal was to send them all out at once – I find that once I start writing I get into a groove, and the latter ones are more coherent than the first batch. I then go back and edit. I’ve written about 30 so far, but at this rate I’d better send some out instead of waiting to get through the whole stack. Give me a week!