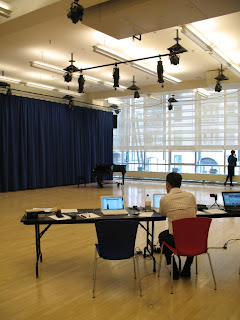 Not raw in the way you think. Just unedited. Excerpted from the database just the way they were spewed forth during the audition tour. Stream of consciousness and all. The good, the bad, and the ugly, sometimes all within the same aria.

Why do I post these, and why would you read them?

1. To realize that the people at the table aren’t writing things that are nearly as vicious as you think they are.

2. To witness the entire range of things that go through our messy crazy minds while we’re listening and trying to problem-solve at the same time.

3. To discover some of the recurrent issues that present themselves in the audition room.

4. To get over the fear of these things, move on with your life, and keep singing and improving.

OK. Now step away from the computer and go sing some more.

And please don’t spend any of your precious time trying to guess if any of these comments pertain to you. If you want to know what we said (and mind you, I’m not encouraging you, just providing information), write us and ask.

Wow, that’s fascinating — thanks! Back to the studio I go…

This was somewhat informative…moreso entertaining. Thanks for the Saturday morning giggles. =)

I’m intrigued by the comment “there’s tremendous potential here, but he’s not getting the training he needs to capitalize on it.” It must be so frustrating to see someone going to waste. Do you do something in a case like that–take the person aside and say, You really need a new teacher? What do you tell him if he asks for feedback?

I would never presume we had enough information (on the basis of a single audition) to know that a singer/teacher fit was wrong, and I would never take someone aside and give advice on a voice teacher. If asked for feedback, I’d simply note that we see far more potential than is currently being realized. It may not be that the teacher is a bad fit at all, but that the singer is going through a transition that doesn’t allow him/her to perform up to potential.

Very often, (and in this particular case) it was a far simpler scenario that had nothing to do with a particular teacher. This singer was not currently in an environment where s/he had access to serious training of any kind: operating pretty much on pure instinct, and doing remarkably well in spite of it. My remark was meant to recognize that the audition was pretty good nevertheless, and I hope that this singer gets into a situation soon that offers the opportunity for solid training.