This week, I’ve been warming up with posts about simple, childish things like rare arias and versatility. Now we get to the really adult stuff. 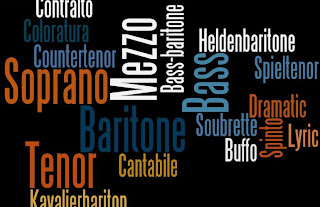 Such a difficult subject for so many singers. Kind of ranks right up there with sex and money in its untouchability. A very personal, complicated decision – really best left to you and your teacher. We as an audition panel really try to keep our second-guessing about Fach to a minimum. We can have our opinions during an audition, but we’d be fools to believe that we have the definitive answers based on a 10-minute hearing once a year. Nevertheless, it’s an unavoidable part of the landscape.

A brief sidebar in case you’re lost. Fach is just another word for vocal category: what type voice you have, and therefore which roles you should be singing. In a choir, you have 4 basic choices – soprano, alto, tenor, bass. In musical theatre, a few more options – ingenue, character, baritenor, etc. In opera, it’s out of control. Dozens of subcategories, and the various authorities and sources don’t even agree exactly what those categories all are, let alone what they contain. And the whole thing is a sliding scale. (I was going to link you somewhere on the interwebs for a definition, but I can’t even find a source that makes complete sense to me. So you’re on your own.)

I developed a checklist for a course I taught last year, and it may be helpful to you. It’s just a list of vocal characteristics that come into play when we’re trying to slap on some sort of label:

Don’t Try This at Home

Like any good organizational device, the Fach system has its limitations, and if either taken to extreme or ignored wholesale, it can be dangerous. You must strive to find its middle ground and not be too intimidated by the fact that it seems to be made up just to alienate you. (There’s a silly semantic thing that I do to keep it from having too much power: use Fach to describe a selection of roles/characters, then describe yourself as singing roles within that category. Somehow it’s less extreme than putting yourself and your voice in the Fach box.)

I feel a bit like I’m practicing medicine without a license by discussing this stuff in general terms, but indulge me.

Usually, within a vocal category, some of the distinctions are clear. If your voice moves extremely well, you can traffic in coloratura territory. If your large instrument can sail through a huge orchestra to the back of the hall, you may grow up to be a true dramatic, spinto, or even Helden– person.

It gets really tricky, though, when it crosses over the basic large categories. It’s one thing not to know if you’re pointed toward light lyric or soubrette roles. But it’s far more disorienting to not know if you’re a soprano or a mezzo. (Ladies, how did we let the guys get ahead of us on this? Face it, that’s how bass-baritones came to be. They didn’t want to pigeonhole themselves in either camp, so they made up a whole new name. And now it’s legitimate. Damn. Let’s make up a new Zwischensoprano category and move on with our lives.)

(I’m just kidding. Don’t get me in trouble here.)

Let’s talk about it. (And guys, you don’t need to tune out. In many cases you can substitute tenor/baritone for soprano/mezzo in the paragraphs below.)

There are plenty of successful mezzos out there who are considered by some to be sopranos-in-disguise. It’s a combination of the relative size and projection of the voice in its various registers, where the natural breaks lie, the subjective “color” of the sound, and the way in which it handles the extremes of the mezzo tessitura. And, to an extent, it’s about your chronological age and whether or not the voice is close to its mature profile.

The sopranos that I believe are legitimately passing for mezzos during the young artist phase of their careers are those who will ultimately mature into bona fide dramatic or spinto voices. There’s a certain heft, depth, and color of sound in the midvoice that is easily mistaken for mezzo color. And once the voice develops and the top is opened up, there’s still an undeniable vocal footprint in the midvoice that has more to do with traditional mezzo “color” than it does with a soprano timbre.

This isn’t the most common scenario, though. More often we hear sopranos whose vocal color and weight are light lyric (or even lighter) singing mezzo material. Remember, this is still rather subjective, but these folks don’t have the kind of midvoice that will carry through any orchestral texture designed to surround a mezzo role. They often have to dip into full raw chest for anything at or below the lower break. And where a traditional mezzo voice begins to gather excitement at the top of the mezzo range, this faux mezzo voice will do nothing but begin to thin. Everything just feels out of focus.

When we hear Filene Young Artist auditions, and the roles/arias don’t really seem to match up with the profile of the voice, there’s a bit of concern. Again, we don’t necessarily know better than the singer and her teacher, but if someone singing mezzo rep doesn’t have the heft and color in the midvoice to be heard above an orchestra, or if someone singing soprano rep doesn’t have enough control and nuance in the top third of the range to be reliable up there, it’s confusing.

During Studio Artists auditions we try not to get too bound up in this. But because our Studio does sing chorus roles in our operas, we need women to sing the mezzo line. All we care is that these ladies are self-described mezzos who are singing comfortably, effectively and healthily in that register at this moment. What they will become, and whether or not they are emergent lyric or dramatic sopranos doesn’t matter. While they are at Wolf Trap, they will work on their own rep with our coaches and staff, and can continue to explore an entire range of options.

How can you tell in an audition if mezzos are shirking soprano competition or insecure about high notes, or if we truly are working through it with our teachers?

Actually, we can’t really tell if you’re shirking the competition or in the process of working it out with your teacher. And (sorry, but this is coarse and blunt), on a certain level we don’t care. If you’re putting yourself out there to sing roles (and although we work with emerging artists, we only do it in the context of full roles), you need to have those problems solved.

Is it ever acceptable to put “zwischenfach” on an application? I personally am teetering on the lyric mezzo-lyric soprano line, but i’m not ready to audition for things as a soprano.

It’s a little odd to put Zwischenfach on a piece of paper. But there’s nothing wrong with explaining that you’re in transition from A to B. Many people do it. Knowing that is very useful, and it really helps fill in some puzzling blanks.

I know that I’m in transition. Does that mean i shouldn’t be auditioning for things at all?

As for whether one should audition during a transition, well, it depends on what you’re auditioning for. There are plenty of programs that can easily handle such a scenario. It’s really between you and the program in question. As I said, it’s a little wonky for us because we assume that the work you’re going to do at Wolf Trap is in the context of a particular role. While there are roles that will accommodate this, they are not plentiful. And it’s a huge risk to take because we have to assume that you’re in relatively stable technical shape, at least enough to sustain a month-long rehearsal and performance period.

Wow. Thanks for staying on the train. I hope this gave you some food for thought. Things get much lighter for the rest of the week :)

This is awesome! I'm going to link and tweet this! Great descriptions! Will go well with a new feature I'm calling "Fach U!".

If you really are in a transitional mode, why not audition for programs like Seagle Music Colony, Brevard or a few others who do take people and help them figure it out on their feet? Programs like those are more "finishing programs" that help an artist through transitional times.