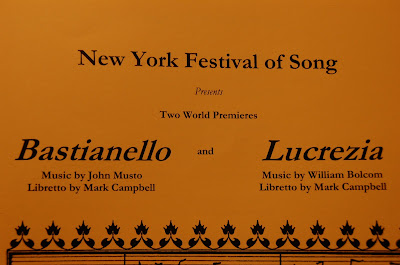 I have always steered clear of reporting on (or any pretense of “reviewing”) performances that I’ve seen. And this one won’t be any different. But because I was at Carnegie’s Weill Hall last night for the New York Festival of Song’s Bastianello and Lucrezia, I can’t let the occasion pass without comment.

If you don’t know it already, I do not come to this as unbiased. I’ve long been an admirer of William Bolcom’s music, and for the last 6 years I’ve had the pleasure of becoming an eye witness to John Musto & Mark Campbell’s wizardry. They wrote Volpone – a truly funny opera (not because I say so, but because people laughed and laughed and laughed) for 12 singers and 28 instrumentalists. Then they wrote Later the Same Evening – a piece that touched me deeply when I saw it “cold” (John sent me a score but my life was traveling at warp speed and I never opened it…) last fall. In the intervening time, John busied himself by doing things like writing and performing piano concerti, and Mark spun out a one-man wonder called Songs from an Unmade Bed.

So it’s not really useful for me to wax rhapsodic about what a satisfying evening at the theatre I had yesterday. I could barely contain my pride at the former Wolf Trappers on the stage, I wondered at how something like this is created from whole cloth, I laughed (actually I snorted a few times… sorry to my seatmates…), and I cried. (Not just metaphorically. Actually. And I’m kind of repressed.)

Rather, I spent the train ride home firmly in the left brain camp, re-examining and asking questions. None (I hope) rhetorical.

Comedy. Hard. That’s why no one tries it (in the opera biz) these days. It’s dangerous stuff.

When it’s good, why is it so very very good? Timing is almost everything. Mark’s rhymes are unparalleled (who else can rhyme “blurry” with “chimichurri” and get away with it?), but the deft ways in which the composers delivered the verses were key. An audience knows when it’s being manipulated, and if it’s done skillfully, we begin to trust the stage. We stop second-guessing, commenting, and assessing, and relax.

And once we’ve relaxed, and begun to experience the music and the story in real time, literally riding along with the performers, we become vulnerable. At, at that moment in Bastianello, something simple and poignant happens. Had this very human moment in the story happened without the benefit of the laughter before, we probably would’ve still be on our guard. Taking note of the voices we liked, wondering about the structure of the piece, obsessing about the diction or the lighting or the staging. But my guard had been let down, my inner critic silenced. And I cried. Context is everything.

Yes, an old and very tired topic. But having heard Mark’s rhymes set by theatre composers, it strikes me how not-different this is from off-Broadway. (Notice I didn’t say Broadway, but that’s a whole different rant.)

It is opera, for these singers don’t need microphones, and the composers have tapped into their marvelous wide-ranging instruments. The harmonies, melodies and rhythms are intricate and sometimes happily unexpected (read: non-formulaic). But it has surprisingly little in common with what’s happening at the Met (or on any other large stage in the country).

New, creative, compelling art is being created like this in many places. This one is within my orbit, so it’s the one I know. But I’m sure that in small theatre companies, concert halls and galleries all over, there are evenings like these. In this particular case, there are only 3 performances in the “run.” Then hopes that someone else will perform them again someday.

Now this isn’t one of those diatribes against world premieres not getting second productions. Well, it is, but with a markedly different slant. When we bemoan the disappearances of new works after their premieres, our disappointment is focused on the amount of effort and skill that went into creating and producing the premiere, and what a shame that it doesn’t pay off over a larger period of time. Not a purely mercenary scenario, but let’s just call it a practical one.

I get stuck on a different dilemma. My brain freezes up when I try to figure out why the effect of something so clearly satisfying comfortably stops at these several hundred people. What is wrong with us (me) that these kinds of performances can sustain me for weeks and make me go on and on about them? (If you’re still reading, you can attest.) And why – no matter how evangelical I might be to my nonbelieving friends – can’t I get anyone to believe me? Opera doesn’t intend to be elite these days, but we’re lying if we say it hasn’t ended up that way by default. Why can’t we get anyone else to care?

Ooh, now I’m really whining. Very unattractive. A sign that I’ve run out of ways to shed any light on this.

And since I can’t close with some music, I’ll give you a snippet of Bastianello’s first monologue. I’m sure Mark wouldn’t mind.

“My spirit these days
Is lost in a maze
Of scholarly thought
And well-worded rot.
Of theories of art
And Hobbes and Decartes
The murky morass
Of hours spent in class.
No wonder when there
I long for the air…
Up here,
Close to the sky,
Among the branches,
Above the world.
Up here,
Where the view is clear
And goes on forever.”

(I took a cast photo to post, but it includes A Very Famous Person – a colleague of Steve Blier’s – of whom I probably shouldn’t post a picture without permission.)