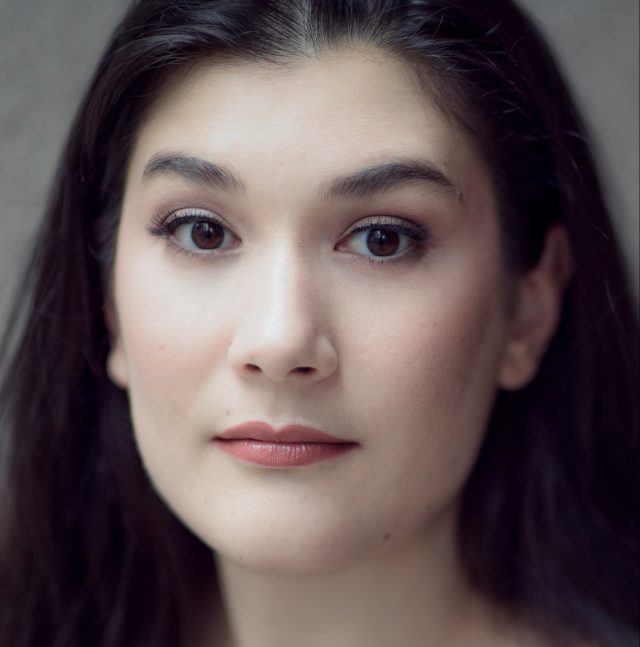 What’s it like for a wise, big-hearted, nerdy mezzo to tackle one of the most evil roles in the repertoire? Annie Rosen breaks it down for us.

What aspects of your role in this summer’s opera are natural fit with your personality and/or which aspects are a stretch for you?

The Stepmother [in Philip Glass and Robert Moran’s The Juniper Tree] is, without a doubt, the most evil person I’ve ever had to be! As I write this, I’m feeling a bit daunted by her, honestly. I think it’s so important to empathize with the characters you play, to really discover what makes them tick. And – not to toot my own horn here – I just don’t really get deciding to kill your stepson, feed him to his father, and blame it on your daughter. You know what I mean?

That said, I’m so excited that librettist Arthur Yorinks chose to portray the archetypical Wicked Stepmother in a complex, if not exactly sympathetic, light. She isn’t a Disney villain or a caricature of pure evil. She’s driven to her heinous acts by jealousy and fear, which I’ve certainly felt plenty of before. And she wants only the best for her daughter, who’s disadvantaged in the family hierarchy by both blood and gender. What I’m working on doing is figuring out, viscerally, why the Stepmother is driven to spite and murder by these feelings. You’ll have to show up in August to see if I get there!

When I was about eight or nine, my friends and I performed choreographed lip-sync productions of CATS in the living room for my parents. Pretty often. Really often. So often that my parents stopped coming. You can only see CATS by your nine-year-old child so many times. I like to think that the quality of my work has risen since then. I could be wrong. But they haven’t stopped showing up yet.

The list is long! For most of my childhood I thought I’d grow up to be a writer, probably of speculative fiction or poetry. But I also loved foreign languages – maybe I could be a translator? I loved music and took piano lessons but wasn’t much good at it. And I also loved to act, although I never thought seriously about becoming an actor. Little did I know there existed a career which combined literally all of those things (and singing too). If I were to do something truly unrelated, I’d probably go be a farmer somewhere.

Unfortunately I am one of those classical singers who sounds classical no matter what I do, which is kind of a buzzkill at karaoke bars. That doesn’t mean I don’t try anyway.

I’m a text nerd. I’m lucky to have had some great training in poetic analysis, which I think has become a bit of a comfort zone for me. Give me a libretto and let me study the rhymes, the meter, who says what to whom and why and what they’re trying to get out of it! The better I know a text and its relationship to the music before I get into a room, the happier I am during the physical rehearsal process. To me it feels like seeding and fertilizing a garden. The more time I spend doing it, the better the fruit tastes.

It’s easy for a singer (or any kind of artist, I imagine) to slip into people-pleasing mode; to try to give whomever you’re performing for what you think they want to see and hear. That is so rarely a successful strategy, because what most people want to see is someone being honest, someone confident in herself making bold choices. That said, though, ultimately we singers are employed only if someone does like our work; if we are pleasing to someone else; if we appeal to someone’s subjective personal taste. Figuring out how to navigate that balance is always a challenge.

I have a lot of them, and I suspect my ultimate dream role is something that hasn’t been written yet. One of the ones closest to my heart is Mélisande – a thoroughly complicated person with a worldview unlike any other character I’ve encountered, set to some of the most ravishing music in existence. And I mean, I can say Carmen, right? Everybody wants to sing Carmen. Including me.

So many choices, but the one I’m making right now is to go to 19th-century Paris and experience the heyday of the Opéra Comique. High society! Intrigue! Ambiguously-voiced women! I get the sense that it was such an artistically rich era, and some of those composers wrote what I think is just such perfectly theatrical music. There must have been some fabulous singing actors who inspired them. In particular I’d like to hear the world premieres of Carmen and pretty much any of the great Massenet operas. That said, it’s hard to think of a better time to be a queer Jewish woman singer than right this minute. I’m into civil rights and antibiotics.

If I could wave a magic wand? I’d give opera in the United States the kind of government funding it gets in Europe, particularly in Germany. That level of security opens the way for more risk-taking, bolder artistic decisions, and of course more employment for everybody! Then again, support like that might have to come with deep cultural roots that opera in America understandably doesn’t have. But now we’re leaving magic wand territory.

More realistically, I’m interested in seeing more women and minorities in leadership positions and onstage. That’s one of the great things about Wolf Trap!

Oh my god, it’s like a movie with the best soundtrack ever performed by crazy monk-athletes enabled by thousands of people backstage and offstage doing just about every job in existence, all of which are required to make it happen. It’s the closest you’ll ever come to watching someone make an entire film, live, in real time. Every opera is a superhuman feat of organization and physical anatomy. And hey, you might hate it, you might be bored, it might not be your thing. But it’s definitely one of the weirdest and most wonderful ideas humans have come up with. It’s just a great use of time. It’s also a safe place to have strong feelings by yourself in a dark room.

I love this, Kim. In musical theater half the actors I know tend to play roles that have the same personalities as they do, and the other half tend to play roles with the opposite personalities of their own. Also, more than one actor has told me that the key to playing the “bad guy” is to start by finding the good person inside or at least the justifiable root motivation, and then use the given situation to figure out why they went too far – very similar to what Annie Rosen describes as her process here. Great self-awareness as well which you draw out with your questions.

Gets my vote for best interview.