Over the last week I’ve had more honest and provocative conversations with our patrons than I’ve had in years.  Some are intrigued and others are outraged.  Although I’d prefer to avoid the latter, it’s the flip side of the same coin as the excitement that’s been present in the theatre during Zaide.

We debate the usual differences of opinion over setting the opera in a time and place outside of the 18th century.  Then I listen to personal and heartfelt responses to the violence that we’ve chosen to embrace in this story.  And I find myself in an unaccustomed and somewhat surprisingly position as I defend and clarify our choice.

I am an unlikely poster child for sanctioning violence in the theatre, for I am as lily-livered as they come.  I can’t watch scary movies, and I am an enthusiastic reader who studiously avoids any literature that graphically describes the horror of war.  Do I cringe every night when I’m thrust into the inhuman environment of this Zaide?  You’d better believe it. 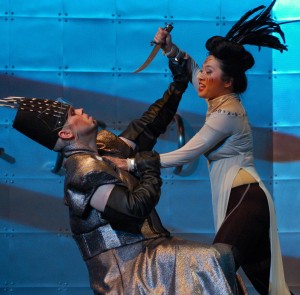 Left to my own devices, I would probably choose an artistic and emotional life that is skewed completely toward beauty.  I don’t easily embrace any art that seeks to amplify and detail the darker aspects of our human condition. Too often I don’t want to be reminded that evil exists.  But when producing an opera with a story that doesn’t flinch when it approaches the subjects of slavery, death, and anger, it felt like a betrayal to soft-pedal the difficult parts.

“Tiger!  Sharpen your claws and rejoice in your stolen prey.
Kill us both and suck the warm blood of innocence.
Rip the heart out of my body and satisfy your rage.” (Zaide)

A reverential approach might limit this opera to colorful harem pants, an escape by ladder, and a Sultan with a  fez.  Not that there’s anything wrong with that.  But it’s tough to reconcile that picture with the vividness of the text, and it’s hard to look deep inside the soul of this intensely personal music of Mozart’s and not take it to heart.

“The proud lion roars with a terrible voice
He throws his shattered chains to the earth in rage.
All who oppose him are destroyed by his deadly beatings…
When someone angers me, I have weapons that demand blood.” (Sultan Soliman)

As we moved toward being brutally honest with the violent content of the story, at the same time we chose not to allow this violence play itself out in the original Middle Eastern setting of the libretto.  The frightening spectre of falling into slavery and imprisonment in the Middle East meant something different in the 18th century than it does today, and there’s no way to raise the stakes without simultaneously raising unrelated political and cultural issues.

So here we are, in the middle of important conversations about the nature of theatre, the vibrancy of opera, and the always-amazing diversity of opinion.  I’m non-confrontational by nature, but these days I embrace raw controversy.  Because the opposite is unquestioning acceptance, and more than anything else, I want people to care.  Disagree if you will, and by all means, tell me about it.

Zaide is the first step in our summer journey.  Its raw emotion will be followed in short order by the laughter embedded in Rossini’s Turk in Italy, then by the shimmering magic of Britten’s A Midsummer Night’s Dream.  Thanks for riding along with us.

After all, opera is a fusion of the arts, and I’m usually intrigued by what directors and designers add to the mix. I loved this production and it still had some awkward moments for me, but at least you didn’t cross a line and enter into some of the disturbing and more disgusting trends on some European stages that I’ve read about. In the middle of it all there are still the glorious singers and musicians who I don’t think were overshadowed by any directorial conceits here. This was my first time at Wolf Trap Opera, and I’m looking forward to more.

First of all, I wanted to let you know that I am happy that WTO found a way to produce this unfinished Mozart opera. For the most part, I was blown away by the music, the singers and their commitment to this work. I can see the difficulty that you had coming up with a production which would honor what you believe to have been Mozart’s intent. I can’t object to the violence portrayed on the stage, especially now that you have pointed out how the libretto supports or even demands it. However, the concept that your team came up with didn’t work for me at all. In Mozart’s time (or very close to it) the Turks were at the gates of Vienna. They were a very real threat to European citizens. And, the view of the Turks was as a bloodthirsty, sadistic, violent, and amoral people. Sorry, but aliens from outer space didn’t cut it for me – it was just plain silly. Once we got to the switched VCR tape (didn’t I see that on Mission Impossible?), I decided the staff was channeling a really low budget sci-fi pic about Roswell, NM. Unfortunately, I also felt that some of the costume and staging choices got in the way of the performers – it looked to me like there were a couple of near misses with the platform shoes on the spiral staircase, for example. It’s always easy for an audience member to second guess a production after the artistic staff has done all the heavy lifting. And, you may have gotten just as many (maybe even more) complaints with a staging that offered a more palpable threat – terrorist kidnapping anyone? I gather you are getting some feedback from angry patrons. I think that you should be proud that the work is resulting in such passion – isn’t that one of the purposes of “art”? Congratulations on a good effort, even if it didn’t quite hit the mark for me. I certainly look forward to future exciting performances by WTO, and I hope they all result in thoughtful post-performance discussions.

The anachronisms were deliberate – we mixed futuristic and retro elements by design. There were some folks who felt the mixed campy sci-fi framework was a plus, and others who were put off by it.

And as you mentioned, we didn’t create a tight allegory, for the only way for us to truly represent the threat of the Turks at the gates would be to deal with current day political and terrorist scenarios, and we weren’t interested in creating another layer of interpretation. I thank you for acknowledging the problems that would be inherent in such a staging.

We’ve gotten surprisingly few complaints, but those we have received are strong, any dissatisfaction is enough for me to address. On the flip side, we’ve had surprisingly and spookily positive reactions from patrons whose taste often runs to the traditional. As you guessed, very little of the response is tepid. And yes, of that we are proud.

As to the violence, there was less violence in this production than one might see in any Shakespearean tragedy. No one was more bloody than the Jacobeans. And yet, people don’t seem to complain about violence in Jacobean plays. Zaide had almost no blood, a few whippings with a device many adults use in their bedrooms for pleasure.

I dislike violence, but I was riveted from start to finish and never felt as though anything exceeded the bounds of good taste. If anything, the actors acted the pain quite convincingly, but acting pain is different from simulating gore. And I don’t believe the team should apologize for acting well. If people only want to see standard and traditional productions, they should research productions before attending them. It would save them a lot of time and disappointment. This was my first time at Wolf Trap, but this show will certainly encourage me to see more, if this is the level of work that is going on there.

I saw the show on Saturday, and voted for the happy ending, because I felt these characters had suffered enough. I appreciated your intent in the intense violence of the staging. However as an audience member, it was really hard to take. I would have rather the choice had been more towards the psychological than the physical. If only because heavy physical violence just doesn’t go with Mozart’s music.

I also heard your fabulous pre-performance talk. And after having seen the production, one thing that struck me was that Mozart wrote this sublime music, and just let it sit, unused. Can you imagine any other composer, having one of the most gorgeous arias ever written sitting around, writing 10 more operas and not recycling that aria? No, Mozart just wrote more stunning music, in an easy, endless flow.

Seeing these two comments appear next to one another has made my day. Thanks to both of you for telling us about your ZAIDE experience – you represent the wonderful range of responses that this production engendered. The next two productions (TURK and MIDSUMMER) will be quite different from this one, but will be compelling in their own ways. I hope we’ll see both of you back at The Barns!