The scene shop is up and running, putting Orpheus on its feet. Costume shop not far behind. The set model photo above is courtesy of designer Martin T. Lopez. Stagecraft is where the magic of the theatre truly remains for me. I know too much about the music sometimes – hard to stop from over-thinking the balance, intonation, tempo, interpretation. But after all these years I am still as stupid as they come about how our designers make magic on the stage. And because of that, I am entranced.

I love what director Lawrence Edelson has to say about Telemann’s Orpheus. He notes that it’s not a “typical” baroque opera in that the gods are not omnipresent, and there’s no deus-ex-machina (literally, “god from the machine”, referring to the stage machinery that facilitated the appearance of the gods in the theater). But we feel the strong influence of Cupid (Eros) and Dionysos (Bacchus) throughout the story.

The characters’ emotions and experiences are intense, and intimately felt in a way that is often dissipated in many Baroque operas with their adherence to traditional conventions of the period. Orpheus explores and juxtaposes different ways in which people feel and act on love. What does the relationship between Orpheus and Euridyce represent in this context? When we see this relationship play out before our eyes, how does that inform our view of the other relationships played out onstage? The answers might be different for each person who falls under the spell of this fascinating work, but surely anyone who has loved will find someone (if not many characters) in this opera with whom they can relate.

Meetings. Lots of meetings them lately, somehow. Happy to get them out of the way before rehearsals start.
Otherwise, these are days filled with hundreds of small preparatory tasks that just fly by. And nine or ten hours later it’s hard to imagine what in the world I did all day. I think it’s called being nibbled to death by ducks…. Sometimes I have to go straighten up the paper in the copy room or rearrange my piles of scores just to feel that I’ve done something tangible :)

Good stuff in this morning’s Foundation Board meeting, though. Wolf Trap’s Institute for Early Learning Through the Arts reported on a recent study that demonstrates the tremendous impact that high-quality and high-intensity arts engagement has on the lucky preschoolers they work with.

Hate to Blog and Run…

… but I’m off to volunteer at the high school. U.S. non-professional premiere of Rufus Norris’ Sleeping Beauty. My son is running sound effects. My week has been full of forest noises, sword fights, bells, fairy dust, burps and farts… 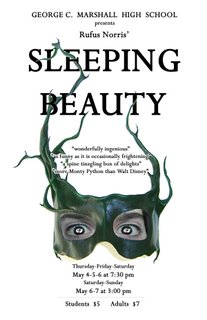 “Drawn from Charles Perrault’s original story, we see what happens after the Princess is woken by baffled and clumsy Prince. Of course they get married and have children, but the Prince’s mother is an Ogress with a taste for human flesh, and the fairy’s problems are just beginning…”

I really like the set model! And the smaller picture on the blog page makes it look like a painting.

BTW, I’ve been following your blog for some time now, and I appreciate your take on the problems of art education…

LOL! Can I borrow that phrase? “Being nibbled to death by ducks!” indeed. That just made my day …