We’re spending Independence Day weekend in our own Italian piazza, with the quirky denizens of Rossini’s Turk in Italy.  It’s not exactly barbecues and fireworks, but it has its own charm. 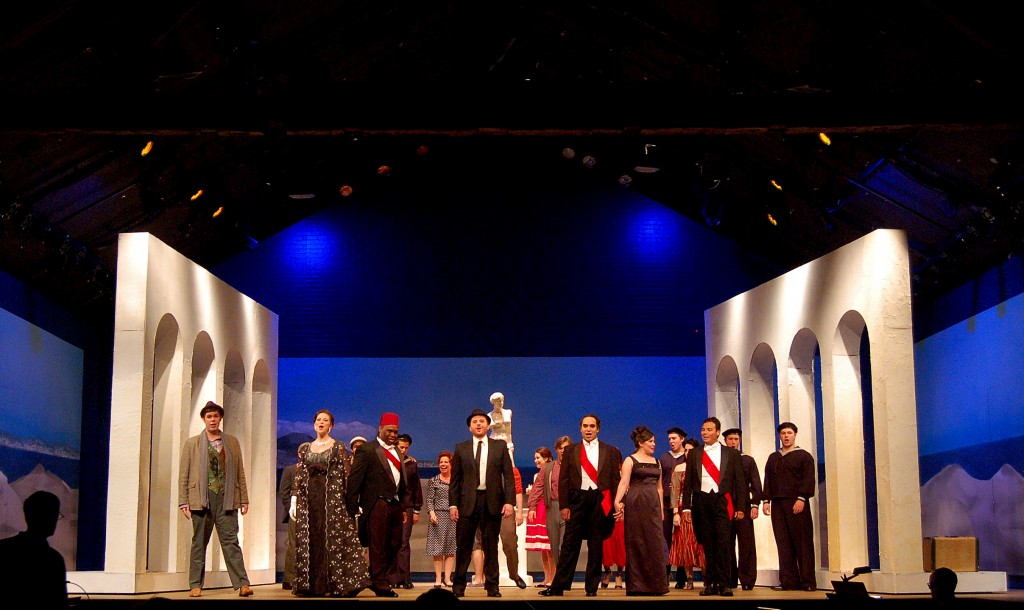 In the spirit of the holiday weekend, some irreverent Turk pseudo-facts and observations:

“I’m thinking about hanging out next to the docks in my sunglasses.  A boat from Turkey?  Oh, let’s see who it is.”  (Plot summary according to the ladies’ man and “pool boy” Narciso.)

“There’s gonna be a lot of sunglass acting in this show.” (Conductor Eric Melear)

How many notes are too many notes?  Well, according to my highly scientific Saturday-night-middle-of-technical-rehearsal math, there are approximately 24,200 notes in this opera.  (For the higher level math required to reach this conclusion, see *footnote.)

“An inspiration for my character?  Samantha Jones in Sex and the City.“ (Any guesses?)

“Don Geronio has social anxiety disorder.”  (Probably to be expected of a husband who’s as browbeaten as he is…)

Rossini’s music?  Well, it’s “rhythmic vitality underneath and lyric beauty above” accord to Maestro Melear.  And from the soprano’s perspective?  It’s “vocal bling.”  (Sorry, Fiorilla.  You’re a far more serious artist than this would indicate, but it’s a description that has legs.  Love it:))

*So, if Fiorilla sings 484 notes in her first act aria, and it’s three minutes long, then there must be 50 times as many notes in the whole 150-minute opera.  Fewer ounce-for-ounce in the recitatives, but multiplied in the ensembles, so it must average out.  So there.  24,200.  If anyone wants to count, I’ll post a correction. :)