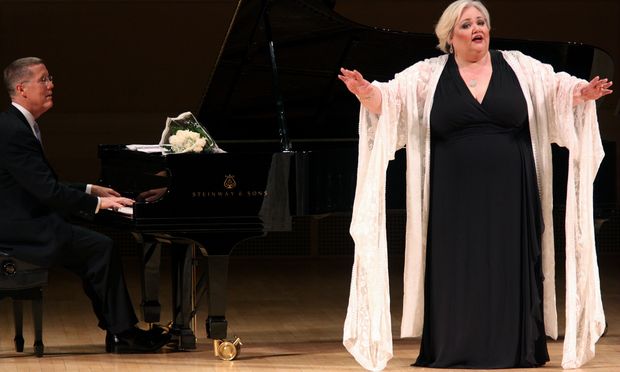 Mezzo-soprano Stephanie Blythe and her accompanist Warren Jones at Carnegie Hall on May 15, 2015 (Hiroyuki Ito/Getty Images)

Tonight, a diversion between days 11 and 12 of our summer season. (I’m committed to posting every day this summer. Wish me luck…)

If you haven’t been following this discussion on Fred Plotkin’s Operavore blog, take a moment to surf on over here: Should Vocal Recitalists Stop Providing Printed Translations of Songs? In short, Stephanie Blythe and Warren Jones recently did a Carnegie Hall concert in which (rather than providing printed translations of songs) they prefaced the performance of each foreign-language song by speaking a paraphrase translation of the text in English.

The original blog post was positive, but on Tuesday, Fred wrote again on the topic, summarizing the reader response to the original article. In short, not all positive.

This debate is a reminder of how jaw-droppingly diverse our approaches to live performance can be. And the fact is – for better or worse – our differences are pretty much hard-wired. Are you good at parallel processing, and can the part of your brain that embraces music and emotion run on a track simultaneously with reading printed text? Or are you a serial processor, devoting yourself single-mindedly to one thing at a time, preferring to listen to and tuck away a poem in English, then dipping into the immersive aural experience?

I think that we in the performing arts need to get better at recognizing the various ways – all legitimate – that our audiences prefer to experience music. Too many times we make qualitative judgments about the “best” way, believing that our aesthetic can force our patrons to abandon their inferior expectations and get with the program. (To be clear, I’m not suggesting that Fred is doing this; he was just expressing his own joyous reaction to a different concert format.) I don’t have a solution as to how we engage and satisfy all these different types of audience members at the same time, but I think we need to be more aware of these differences. Only then will we be able to identify why people come to our shows at all and how we can continue to serve up something that they want.

Rant over. There’s another corollary to this particular discussion though, and that’s the one that acknowledges that Stephanie and Warren bring a maturity and sophistication to this exercise that most artists don’t yet have. If talking to the audience isn’t something a performer can do with amazing facility, probably best to put it aside for now. (I flagged this blog post last winter but never followed up; it seems particularly appropriate now in light of this conversation.) We love it when artists communicate genuinely and easily from the stage. But not so much when they’re ill-suited, forced into doing it because a producer thought it would be a good idea.

Food for thought. Now back to rehearsal. The Count is about to get what he deserves.

Really good blog post on this subject- I just wanted to clarify a few things. Warren and I have been reciting text for the last three or four years in our recitals. The one difference with this program is that we did the first half in French, and I chose to recite translations of those songs. The Poulenc has five songs, there were two Ferré, and three Brel. We did not recite before each song, we recited all the poems before each group. In the second half, we recited the four Auden poems of the Britten Cabaret Songs before performing them. The five Nöel Coward songs were not recited, as they are lyrics, not poems, and to read them would give away all of the humor. All of the texts were available to the audience following the concert.

I realize that as you say, there is not a one size fits all approach to recitals. Not everyone is going to agree with the way we do the texts, but I can say this: Our audiences are attentive, quiet, and active listeners. Are there members of other audiences that read the texts along that are just as active in their recital experience? Of course. But there is something that happens in a recital when the singer sings directly to an audience of eyes- and contrary to some people who commented on Fred Plotkin’s original article, it has nothing to do with me needing the audience to watch me- it has to do with the communion that comes from performers and audiences creating a connection through the performance- and it IS different when you look out into a audience with their heads in the program. I spend my time teaching young singers to take the risk of meeting the audience head on- looking straight into their eyes for inspiration, confirmation, for the joy that comes from active contact. By reciting those texts, Warren and I give the audience the opportunity to have a reaction to the poetry the way poetry was meant to be experienced- read aloud. They react and then immediately hear how the composer reacted.

For what it is worth, the bulk of the negative commentary that I read following Fred’s post was clearly written by people who did not read the article, and in most cases people who did not attend the recital. Yes, there were a few that attended that wrote they did not like the approach, but there is no way to please everyone, which you so astutely wrote above. This way is just one way. I have never intimated that this way is best, but I can say that if audience reaction says anything, it is successful.

Thanks for this comment and all of its illuminating details. The best way to continue to offer recital audiences the most vivid experiences is to really commit to and understand all of these nuances. And bless you and Warren and everyone else who isn’t satisfied with the status quo. I’m really excited by this approach, and I know that personally, I prefer it to reading. (I find that I always try to do a poor equivalent of this on my own, by attempting to swallow the whole poem in the silence before the song.) And yes, how frustrating it is to look out on a sea of downturned heads… :(

I think that the most exciting thing about your message is your commitment to helping young singers understand the value of inviting and honoring active contact with the audience. Brava, and many thanks to you for engaging in this conversation!