The reality of producing and playing a workshop has eclipsed (well, smashed…) any hopes of systematically blogging about it. I will have to do so in the past tense. Later this week when the dust settles. We’ve been working steadily all week, and colleagues from OTSL (with whom we co-commissioned Inspector) arrive today for our final run-through.

We’re indebted to the cast of this workshop (see below) for their wonderful preparation, good will, enthusiasm and talents. And of course to John and Mark for this gift of a comic opera about the foibles of government, greed and chutzpah. 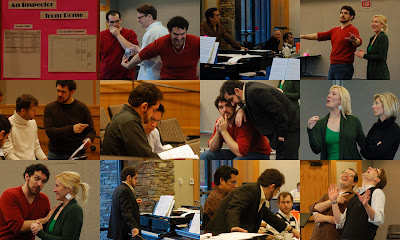 Thanks for your posts on the workshop, Kim. I can’t imagine how exhausted you are – having played for it, as well as your administrative responsibilities. When you have time, would love more detail about your workshop process, WTO’s goals for a workshop etc. The development process for new operas is often shrouded in mystery (when there is a development process!) so I think it is very useful to see how different companies are handling this challenge!