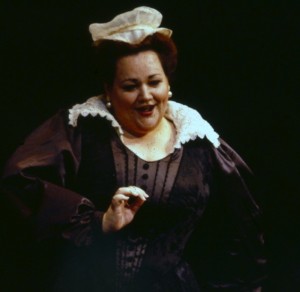 Stephanie spent two summers at the Trap, and her roles included Fidalma in Il matromonio segreto, Marchesa Melibea in Il viaggio a Reims, Dame Quickly in Falstaff (far left), Tisbe in Cenerentola (typical WTOC luxury casting…) and Tolomeo in Giulio Cesare. I had the privilege of being on music staff during Stephanie’s Wolf Trap summers, and I can’t wait to welcome her back in a few weeks.

On the upcoming August 24 anniversary concert, we’ll be treated to some of Stephanie’s signature Handel in “Aure, deh per pietà” from Giulio Cesare. She’ll also pair with Lawrence Brownlee in a show-stopping duet from Rossini’s Tancredi.

Nobody present in 1995 for “Julius Caesar” in The Barns will ever forget the stunning impact of Stephanie as Tolomeo, her first-ever Handel role. To hear a voice of that amplitude in so intimate a space in a Handel opera was overwhelming, and she had the audience riveted from her first notes.