These words seem to be the most important ones that entrepreneurial Shanghai street merchants need to learn. It’s impossible to walk down the street without being accosted dozens of times. I, with my charming middle-aged white American woman looks, must look to be a particularly easy target. I’m not sure where all of these bargain items (which seem to be mostly watches and handbags, with a side market in DVDs) come from, but the sellers seem to want to lure customers into small alleyways for transactions.

I will never be good at the art of the deal. I just want to know how much something costs, and then make a decision as to whether I can afford it. (The answer is almost always no. It’s a handy technique – keeps me from acquiring too much.) My colleague LWF and our local guru Mita are masters of negotiation, and I managed to buy a few presents to take home thanks to their intervention. 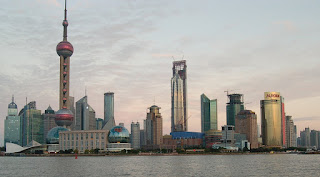 Today’s entry is off-topic, as my professional life has been in the last few days. There is application screening left to finish and audio samples to tackle, but I’ve had a difficult time focusing since the flight to Shanghai on Wednesday. Perhaps tomorrow I’ll be back on task. We’re overdue for a 2008 Repertoire Short List post.

First, there’s Asia. Not a surprise, of course, but so very different from my entirely North American/European experience. Beautiful, bewildering, and mystifying at the same time. My daughter is the expert on communist history, and perhaps she’ll be able to explain all of this to me someday.

But then there’s the socioeconomic shock that comes from being a guest in a lovely and gracious hotel that I couldn’t afford to touch under normal circumstances. There’s an almost unsettlingly high level of elegance and beauty that permeates everything from the food to the arrangement of my toiletries by the housekeeping staff. It inspires both guilt and awe in this bleeding-heart liberal capitalist.

The Chinese singers and pianist who share the stage with us this weekend were charming colleagues at this morning’s rehearsal. Their approach to the performance seems to be a bit more studied and serious than ours, and I wonder if they think the Americans to be a bit too casual and informal. The rehearsal itself was a microcosm of our cultures, having little to do with opera.

Part of the opulence of this place is its food. I’m not much of a “foodie” (as everyone knows most singers are!), but even I had to admit that last night’s experience at Jade on 36 was the most memorable meal I’ve ever had. I’m the opposite of a food snob, unfortunately – rarely go out of my way to pay a lot to eat, and rarely think that fancy restaurants are worth the time and money. (The unfortunate flip side is that I tend to eat indiscriminately.) But this was true theatre.

Hope all is well and enjoy your time there!