I hate blog posts that begin with an apology, but here ’tis: I dearly love the chance to speak my mind in this forum and to tell you things about our little opera company that you couldn’t learn from an official website or a brochure. So I hate the way I am neglecting this little blog this summer.

I’m a list-maker and task-accomplisher, and keeping our seasonal engine running smoothly almost always trumps the pleasure of writing here. But that’s not new. The two additional obstacles in recent months have come in the form of writing deadline for other vehicles. First, the Huffington Post assignment (both a blessing and a curse, to be articulated somewhere down the line); and second, my Wolf Trap Opera Insider weekly emails.

Not sure how to reconcile all of this, but other than getting the grrrrrr out of my system, I do have another agenda this morning: 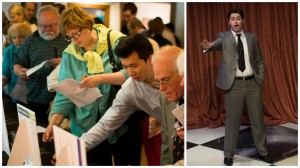 One of the holy grails of our time and our industry, it seems. A complicated, thorny, and many-sided phenomenon. It seems to me that we in the opera business often do things to discourage audience involvement; I have my theories about why, but that’s not the point. The point is that we tried something last week to close the chasm between stage and fan. It was called Aria Jukebox.

The singers offer 4 arias/songs each, and the audience voted for their favorites in the lobby (with quarters we provided at the door; and some with folding money from their wallets!) Pretty low-tech and simple, actually. But there was an exponential difference between the vibe in the theatre that day and the normal atmosphere at a straight-ahead concert.

The Washington Post called it a “gimmick.” I was a little cranky about that at first, but then I looked it up. Merriam-Webster lists three definitions, not getting to the negative one until the end:  1. an important feature that is not immediately apparent | 2. an ingenious and usually new scheme or angle | 3. : a trick or device used to attract business or attention. (Of course, I’ve called out my favorite description:))

But in the end, I don’t really care what you call it. The artists and I had a blast, even though we only got to perform half of the repertoire we prepared. The staff enthusiastically counted quarters and submitted statistics (the Tchaikovsky aria won by 50 cents! the Gershwin got twice as many votes as any of the competing options!). I told little stories to set up the selections. And the audience sighed loudly – with satisfaction when their picks were winners, and with resignation when they lost. All in all, a sense of investment that is too often missing.

We’ll do it again next year, with a few procedural tweaks to make it go more smoothly. Perhaps someday we’ll even find some money to do it in the big theatre with orchestra instead of piano. (OK, now I really am feverish. But deny me nothing in a dream.)

It was a complete delight. I did not know about the “gimmick” in advance and so had a limited amount of the folding stuff to goose the outcomes I wanted. I’ll know better next year! Thanks, Kim, and singers!