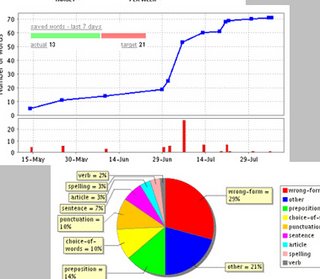 Thinking a lot lately about results. Validation. Success. Measurement. I’m on a planning team at work, and one of our tasks is to determine how we will measure what it is we say we do. A perennial problem in the performing arts.

Back Where I Started

If I had to pinpoint the biggest reason I ended up leaving music therapy, I’d have to say that this is it.

I worked in a state psychiatric facility where the behavioral model reigned supreme. Now, I don’t dispute the value of this approach, but I was in my 20’s, yearning to help change people’s lives through music. And we did. People with irreversible brain damage whose eyes lit up when they were able to communicate with others without words. Teens in trouble (usually involving severe substance abuse) who addressed things in songs they composed that they would never speak to the staff psychiatrists. Mentally handicapped kids who just loved those Orff instruments to death. And desperately ill folks in the geriatric unit who could no longer speak but would come alive singing every word to every popular song from the turn of the century. (The 20th century…)

But the hospital needed accredidation, and that meant more hours of paperwork (the dread “SOAP” notes – subjective/objective/assessment/plan) than hours of patient contact. And all of the positive signs and progress that kept us going really didn’t count. We were to measure number of minutes of activity per session, number of occasions of eye contact, percentage of on-task behavior, etc. Are all of these things indicators? Yes, of course. But I was in my 20’s, I wanted to change the world, and I was impatient.

So here I am 25 years later, still impatient. I want to believe that a few hours engaged with terrific music will make a difference in someone’s life. I still don’t know how to measure it, but I’m not naïve. It’s crucial that we try.

Footprints and the Giant

I bookmarked a speech from the Artful Manager’s archive in which Andrew Taylor speaks eloquently about the “Footprints & the Giant”.

There are economic benefits (of the arts), social benefits, educational or personal benefits and broader civic benefits. They are important. They are compelling. And they are convincing when we ask individuals and groups to support the arts with time and money. But…they are effects and not causes. They are the footprints a giant leaves behind, but they are not the giant. The arts are not a separate thing from us. They are us….. all ways we see each other and ourselves. They are all ways of learning…. Ways of reaching across perspectives and backgrounds….. often what define us long after we are gone.

April is “Take a Friend to the Orchestra” month. Try to find some time to browse this year’s “TAFTO” contributions over at Adaptistration. One of my favorite observations from TAFTO’s 2005 installments came from harpist Helen Radice: “The best teachers are the ones who make you believe a) that something is wonderful, and b) you too are good enough to know it.”

I’m a voice student studying at Northwestern and really enjoy reading both yours and Brian Dickie’s blogs. I just wanted to say that the quote you posted from harpist Helen Radice couldn’t be truer.