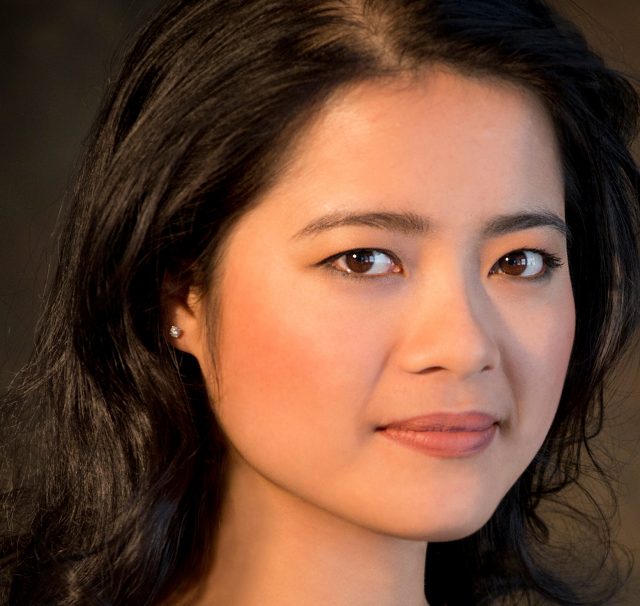 If you’ve ever wondered what it’s like to become an opera stage director, today’s spotlight is a great place to start. Hear all about it from 2017 Directing Fellow Mo Zhou! Her production of Listen Wilhelmina! has its final 2017 performance today at Wolf Trap’s Children’s Theatre-in-the-Woods.

When did you know you wanted to be a director? What path have you taken to arrive where you are?

I came to the United States for college, thinking that I would be either a lawyer or international law specialist. However, since I attended a liberal arts college, I needed to take art classes to fulfill my distribution requirement. Thus, in my sophomore year, I took Theater 101. This class took me to American Repertory Theater in Cambridge, MA for a field trip, where I got to watch my very first theater show in this country. It was Chuck Mee’s bobrauschenbergamerica, directed by Anne Bogart. I had no idea about what was happening on stage, but I did have a surge of epiphany that made me no longer see the world the same when I stepped out of the theater. I continued taking more theater classes as cramming for pre-law. But the time I reached Directing I, I knew within 5 minutes into that class that stage directing is my calling.

Of course, when I disclosed my wish not to go to law school and pursue a life as an artist, my parents were very concerned. Our deal was that I would apply to the top MFA directing programs immediately after college, had I gotten in, I could continue as a director. I applied to Yale and Columbia and got into Columbia. The most exciting part of this trajectory is that the Directing Program at Columbia is run by none other but Anne Bogart herself. Exact two years after seeing that pivotal show in Cambridge, I became the student of the director who changed my life.

I spent three years working extensively with Anne Bogart and Brian Kulick at Columbia. It is like a CrossFit bootcamp for directors, because I directed SO MUCH. This experience really gives me a strong muscle memory. During the 2nd year of my MFA study, I realized that I actually wanted to be an opera director. Therefore, I consciously steered myself into this field. Knowing nobody in this business, I just cold-called everyone and eventually launched a job as rehearsal translator for Atom Egoyan in Spoleto Festival USA – that was my first job in opera.

Since then, I have participated in young artists program like the Glimmerglass Festival, Merola Opera Program with San Francisco Opera Center, as well as directing smaller opera projects on the side. It is during the course of directing my own opera shows that I realized that there are still some technique glitches that I needed to smooth out as a young opera director. Therefore, I spent the past two years at Juilliard School, apprenticing alongside with Stephen Wadsworth. He really helped me reformulate my creative DNA and sharpen my skill sets as an opera director. And here I am, as a second-year directing fellow at Wolf Trap Opera!

Do you have a musical background? What’s your instrument? How does your musical training inform your work as a director?

I started learning piano when I was five, but I wasn’t a good student, because I hated practicing… I was very good at sight-reading so I managed to get away with each class with as little practice as possible and even managed to score some juvenile competition awards. As soon as I turn 16, I told my parents that I had no intention of becoming an artist (little did I know!). Instead, I wanted to be a serious legal scholar and promptly stopped my piano lessons. Although I was a lousy pianist, this experience is crucially helpful for me when I become an opera director. I believe you can find so many details in the music. So I really love drilling the score. I actually sent my old piano teacher a thank-you letter because I couldn’t imagine how I would navigate in this art form had I not have the ability to analyze the music.

Opera singers are the most fascinating creatures in the world. First off, they have impeccable intelligence. They always bring profound insight into rehearsal because they all have been studying the music/role for such an intensive amount of time. I find it extremely stimulating. Secondly, singers all have a burning can-do attitude. They are all ready to jump in and just explore things. I can give them a general idea of what I am going for. They often come up with something ten-times better than what I have envisioned. It is enriching journey in both directions. I am learning so much from them each day.

How to leave room for music to breathe.

As a stage director, my first instinct to come up with movement/intention/gesture that fill every measure of the music. However, throughout my practice that sometimes we actually need to leave space for music emerge. I came up with this term ‘let the music breathe’ and kept this note in my pencil bag. Sometimes, ‘less is more’ and it is a really fine line to balance.

I think I would be an English professor. I am immensely interested in Judith Butler’s theory of gender performativity in both performing arts and literature. I still binge reading her book now. During my most obsessive phase in school, I even thought of quitting theater directing altogether and pursuing a Ph.D in literary theory. Thankfully, my English professor from college talked me out of it. She told me to pursue my passion as an artist while I was ‘young and reckless’ because I could always go back a Ph.D program whenever I want later in my life. I still feel grateful for her advice.

I am a jazz junkie. My guilty pleasure is the Golden Age American Musicals. I listen to Rodgers & Hammerstein, Lerner & Loewe, Cole Porter, Irving Berlin and others non-stop when I get off from opera rehearsal. Those old Hollywood musical movies are what I’ve grown up with in my household. I also can sing entire soundtrack of Gentlemen Prefer Blondes backward to forward because that’s practically how I learned English – I listened to the original cassette back and forth for thousands of times until I could speak every world like Jane Russell and Marilyn Monroe.  I was 11 at the time.

My favorite part of preparation process is to learn the score and original source materials. I see it as an intimate conversation with the creator of the piece. Through those tangled materials, I would get to figure out what triggers and excites them back in that very specific historical moment. I am obsessed with finding the missing puzzle in their train of thoughts. It is always easier to come up with a grand concept for your show. However, the initial sparkle is what makes me sit on the edge of my chair.

In rehearsal, it is always like a party of alchemists. Singers, musicians, designers and I each put in something special from our personal expertise and together we make something indescribably delicious and beautiful. The show always, in a way, has its own life as it would never end up as what you’ve originally imagined. I start to appreciate it because I think this process of letting go represent the exact nature of ephemerality of our everyday life. Learn to cherish and do good work in every single moment, and let it go. It is a very spiritual process.

Definitely finding a balance between work and your personal life. Because I spend so much time traveling on the road, it is actually quite challenging for family. Fortunately, everyone is super understanding. However, I do realize recently that I need to learn to say no to certain projects so I could devout enough quality time to people I cherish in life. I am still figuring it out.

I want to go back to the exact day of April, 21st in 1749 where the dress rehearsal of Handel’s The Music for the Royal Fireworks took place. I would probably pack a good novel with me because I would need to sit through a three-hour traffic jam on the London Bridge. I have an inexpressible affinity to this piece so I would want to see it when it was first performed in the public. I wouldn’t go for the actual opening, because apparently it rained and the set caught on fire…

If I were lucky enough to catch Handel himself on site, I would thank him in person for depicting every possible emotional nuance and subtlety I could possibly imagined in his music. His music helps me go through the ups and downs in life. I would also probably snatch a selfie and an autograph from him too!