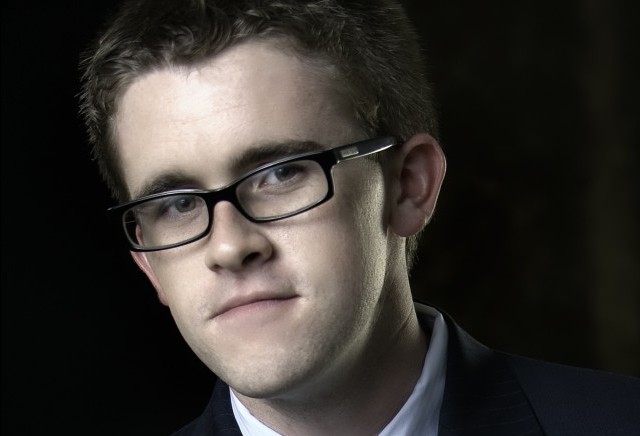 The job of a Collaborative Pianist in the opera biz is a fascinating one. Today, we feature an interview with Peter Walsh, one of our two 2015 Coaching Fellows!

When did you begin playing the piano, and how did you transition into collaborative piano?

I began playing the piano when I was 5 years old.  Although I have trained extensively in solo piano, I’ve always felt that my best playing comes out in a collaborative setting.  Collaborating really gets me out of my head, and allows me to focus on supporting someone else.  While in college, I accompanied many singers and played a lot of chamber music, particularly in graduate school.  There were just so many opportunities to be had!

Of all the musicians I have accompanied, playing for singers has always felt the most natural to me.  There is an enormous amount of inevitability between the singer’s breath and their sound… I have always found this to be so wonderfully readable.  I love playing around and into their sound.  Most of all, working with singers brings out some of the best things in my own playing.  As instrumentalists, we’re at our best when we remain connected to our own inner singing.  Working with singers helps me stay in touch with this, and I’m very thankful for that.

As far as working in the opera house is concerned, the multi-tasking is certainly the most challenging thing.  We must be aware of many things: playing the piano well, listening to the singers (their language, intonation, resonance, phrasing), interpreting the conductor’s gesture, the orchestration, all while staying in touch with the story and drama.  It can be quite overwhelming!  But, gloriously overwhelming.

Sure!  One of the reasons I’m so drawn to working with singers is because I started at a very young age.  Some of my earliest musical experiences were with vocal accompanying — I believe my first “go” at it was in second grade.  My elementary school presented a yearly holiday choral performance, and since I had such a strong distaste for the idea of singing in public, I asked if I could accompany the class on piano instead (in all honesty, I don’t know what I would have thought if someone told me that later in life, I’d be singing and playing opera excerpts in auditions).  We had a wonderfully supportive music teacher at the time, and thankfully, she was into the idea.  I’ve continued with it ever since!

I don’t often think about this, but it’s interesting to ponder.  I feel like I could see myself as a psychologist or social worker.  I love connecting with people, talking to them, listening to their story… and doing my best to make them feel at ease.  I think it’s a big part of what draws me to collaboration in music.

So much.  When I am not listening to opera or other classical music (a highly frequent occurrence) I listen to jazz, RnB, rap and hip hop.  Some classic rock too.  Some of my favorite non-classical pianists/artists are Bill Evans, Keith Jarrett and Stevie Wonder, to name a few.  I love to make arrangements of my favorite standards from the American songbook repertoire, and I try to play almost every pop song I know by ear.  I care deeply about playing things that regular, every-day people know and can connect with emotionally.

As far as opera goes, we as pianists are most active on the preparation front.  I love to accompany staging rehearsals.  Though our first priority is being with the conductor, I attempt to equally prioritize playing with as much specificity, clarity and rhythmic vigor as possible, in hopes that it inspires the singers.

I also adore attending the first orchestra read of a production.  Listening to a live orchestra will never cease to feel like a giant privilege.

I am fortunate to have not had to move around much just yet.  I grew up in San Diego, and lived in Los Angeles for 11 years before starting the Young Artist Program at LA Opera.  I am not a huge fan of change, and I am a died-in-the-wool southern Californian.  So, I anticipate that if/when it comes to it, traveling/moving will be the most challenging thing.

Yes.  I know I mentioned him already – Stevie Wonder.  He’s such a well-rounded musician: an incomparable singer, piano player, and an incredibly crafty composer/song-writer.  I love his songs, the words, the grooves, his harmonic language; his music is so colorful and it makes me so happy when I listen to it.  The fact that he can play, sing and compose at such a high level pretty much covers all the bases in my book.  I also heard him live recently for the first time — one of the best concerts I’ve ever attended by a long shot.

Beethoven.  Although I imagine him an incorrigible conversationalist, I feel like I’d learn so much from him about true personal artistry.  More than any other composer I have studied, Beethoven’s music has an almost aggressively fearless sense of self.  This is extremely attractive to me… I believe it’s one of the keys to having success in music.  It’s interesting, because out of all the piano repertoire I’ve played, Beethoven was always some of the most challenging music for me to capture.  But, I hope to play a lot more of it!

Would love to hear you perform one day.

you are talented and terrific. Sending love!