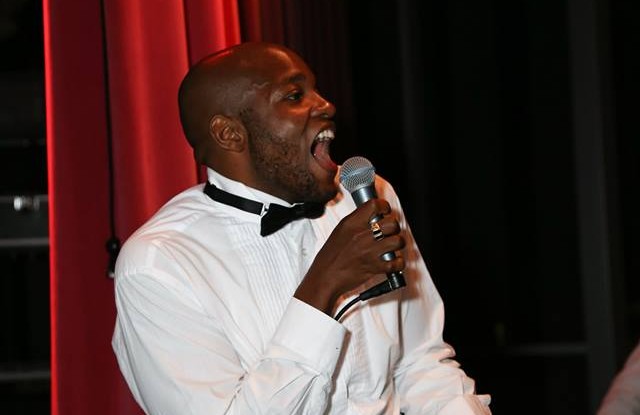 During the 2015 season, the blog will feature interviews with our Filene Young Artists. Today, we hear from tenor Frederick Ballentine, Count Almaviva in The Ghosts of Versailles.

I got my man voice going into my sophomore year of high school. In the same year I was cast as Aeneas in my performing arts high school’s production of Dido and Aeneas. Honestly, I didn’t know how to appreciate the music at that point in my life, but I knew how to appreciate the drama. I love every moment of being on that stage. And that simple duet between the title roles sealed the deal for me. I still remember how it blew my mind to just jump into a character that’s so different from myself. Plus I got to SING while doing it. Thats the answer to both those questions for me.

I once heard someone say, “Have you done your runs today, girl?” I realized that he was joking about this girl’s warm-up regimens. But after further thought I realized that he was asking about everything. Had she worked out, had she warmed-up, had she actually practiced her runs? The questions that can erupt from that one little question are never ending. I say it to myself whenever I need to make sure that I haven’t gotten lazy.

Law or massage therapy… WHAT?!

I’m very eclectic in my musical tastes. In one day I’ll use my XM radio to listen to opera, musical theatre, 90’s hip-hop, top 40, and Jazz. I’ve never been able to gravitate to one genre because I can find something to enjoy in so many areas. In terms of what I like to sing… If I listen to it, then I’ll probably sing it, but only in the shower or at Karaoke. I will definitely attempt belting whenever possible.

I’ve discovered an ability to count which I never knew I possessed. This was HARD to learn. Also I have never actually been able to perform one of the Almavivas and did realize what unfortunately selfish characters they are. Of course, I’ve seen all the Beaumarchais operas a few times, but the intensity of this character’s ability to think only of himself is very striking to me. That aspect of the character is a big stretch for me. He isn’t a villain, and I can’t play him as such. Because of my own feelings about him, I’m going to have a tough time making it about him and not about my annoyance with his personality.

Preparation is always fun because you get a chance to merge with your character and the opera. I love the rehearsal process because of the people. Opera singers are the most random and weird people I know. I savor any moment I get to interact with them. However, despite all that, there’s nothing better than being on stage with your colleagues and working to turn a few notes and words on a page into a massive, living thing. Feeling the energy of what you all have created, the audiences and the relationships you’ve build with your characters are definitely my favorite parts of all this.

Every since I’ve transitioned to tenor, I’ve found the actual singing to be the most challenging part of this career. I love the travel, and I learn music quickly, and I have tough skin. However, I feel as if I have to constant work to make sure that my singing in on par. Being a tenor is hard. I miss being a baritone.

Nothing comes to mind. I think that most useful hack one can have is to love what they do. It makes everything concerning their jobs easier.

People are being made to actually get out there and perform now. Not to say that the “park and bark” era wasn’t very satisfying. It was a time when the beauty of the voice surpassed anything else happening one stage. As a trained singer, I have to appreciate that purity of the art form. However; we’ve now moved to a point where what we bring to the stage dramatically is always greatly appreciated. The voice is still the selling point, but I feel that there is now more to appreciate. I do find it discouraging to see how many of my extremely talented colleagues are struggling to find work due to issues of appearance. The taller, more handsome tenor is more likely to get a role, over a more talented and slightly chubby tenor. The aesthetic drive of this career is such a confusing and double edged sword.

I’d say that the rush of hearing a gorgeous high note is enough to pull anyone into this art form. After that, I say that going to an opera is a little like going to a film with a John Williams score. There are extraordinary moments of anticipation  and energy created by the music. An opera is very similar, except people sing with the orchestra. The isolated moments of anticipation and energy during a scene shift in a John Williams score can be felt throughout the opera. And then the drama and beauty of the voices ties it all together.

PETER GRIMES!!!! I mean, last week is was Loge, and Pollione before that so it will probably change before the end of the month. Peter Grimes is such an enormously complicated character. I look through that score and know that every single one of Britten’s ridiculously specific markings are just more pieces of the intricate puzzle that is this character. I can’t wait to take a crack at it. Plus I just love singing Britten’s music. Peter Pears was weirdo of a tenor, but so am I so its fine.

Mozart. He would have to be such a fascinating person. What a varied and determined life he led. I bet he was just unbearably strange.

THE TRAP! I loved being at the trap back when I was a studio artist, and I can’t believe I get to go back to spend time with such fun people. I know so many of the performers this year, and I just know we’re going to create some amazing artistry despite the complexity of this score.