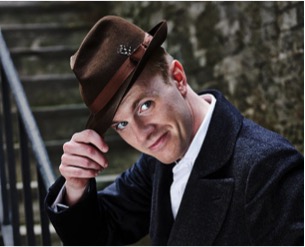 During the 2015 season, the blog will feature interviews with our Filene Young Artists. Today, we hear from baritone Morgan Pearse, Figaro in The Ghosts of Versailles.

My mother convinced me to apply for this scholarship she spotted in the newspaper in Sydney when I was midway through my undergraduate degree. My intention was always to go back and study law after finishing a degree in music you see. Anyways, I left applying to the last minute (typical) and had to hand deliver the application on the other side of town from where I lived. I almost didn’t go. I ended up winning, which was amazing. That’s how i was able to afford to go to London and audition, where i ended up doing my masters at the Royal College.

Probably something really boring and conservative… law or consultancy. I would have probably then realised it wasn’t for me sometime in my 30’s and decided to throw the towel in and try something else. I’m fascinated by people, so whatever it would be it would have been something not based at a desk all day.

I adore music outside of opera. For me, its so important to feed my soul with music from all sorts of places. I listen a lot to ‘old-school’ jazz (Ella and Sinatra in particular) and whilst I’m not a real fan of pop music now, there’s some seriously cool stuff from the 70’s and 80’s which is constantly on my Spotify playlists. I’ve also (along with everyone else it seems) started listening to Courtney Barnett recently – an Australian accent in music is full of so much nostalgia for me.

Figaro is a great character to play. It’s interesting actually, as my next project after Wolf Trap will be to play Figaro in The Barber of Seville with the English National Opera, so i’m trying to see a track of his character from the first opera (Barber) through The Marriage of Figaro, to Ghosts. He is always relaxed and in control of himself. everything comes fairly naturally to him whilst at the same time being a little alof which makes him a real ‘bloke’ and not too cerebral. Things are as they are to Figaro and I think that’s why we love him in the audience in all three operas. In contrast, i overthink everything so its fun and challenging to have a character who really doesn’t do that.

I think my favourite part of the process is after you’ve finished bashing away at a piano (in my case my piano skills are terrible so its more like a praying mantis is attacking the ivories…). It’s then that you have this period of a few weeks where you can sing what’s on the page but its not memorised, and you’re coming up with options as to what each line means. How does this fit into the story, what do i really mean? Great fun. There are never two performances or performers that are the same because of this.

The time commitment and the lifestyle, absolutely. i find the learning of music rather enlightening but its the freelance lifestyle, always on the go and never really ‘home’ that becomes difficult for me. I’d love one day to have a home and work in that city occasionally too!

Oh a few – coffee definitely. Anyone who knows me knows that I adore good espresso coffee (don’t all antipodeans?). I also carry a singer’s pack with me everywhere – post-it notes, lots of pencils, erasers, paper clips, lip balm, paracetamol and breath mints (who wants to sing at someone with bad breath?) Finally, humidifiers – essential for any opera singer travelling. The best part is that when you wear one on a plane everyone thinks you’re sick and nobody talks to you – awesome!

The most exciting thing is that opera now has a larger audience than ever. There is so much talk of the art form dying but more people see opera today then they have ever done before. I think the outreach programmes almost every opera house does, combined with the broadcasting of so many shows from the big houses is a great thing.

The universality of the stories. Opera is current, it’s not old and, it’s for the people, it’s not posh, it’s not stuffy. It’s fun, hip, and connected to things every person on the planet from the hedge fund manager, Queen of England and local plumber have experienced either directly or indirectly. Opera transcends status and time, and a good production can make you laugh, weep, and/or transport you somewhere you’ve never gone before with a movie/play/tv series. It’s also properly live, everything un-miked, and exemplifies the power of a single human being as much as watching an elite athlete run a marathon. its so exciting. and, its affordable. more affordable than a football match, and more affordable than a Beyoncé concert, so come!

Operatic roles are always fun when they challenge mind and voice, but if I had to choose, I would love to sing Billy Budd one day. There is a child-like simplicity to him, and he is such a beautuful tragic character. Every time I’ve seen the opera I’m in tears by the end.

I have always had a respect for artists who are able to work in the three areas of performance: opera, lieder and concert repertoire. For me, generally, they tend to be the most exciting lush voices that make me want to listen. Sir Thomas Allen is one you can’t ignore as a baritone, and Ive always been fond of Gerald Finley who I’ve had the pleasure of doing some masterclasses with. The best part is they’re both incredibly humble and beautiful people as well as titans in this industry.

Hands down it would be Shakespeare. We know nothing about this guy at all really. So much conjecture in the history surrounding him. Meeting him would be fascinating, and as a bit of a Shakespeare nerd, I’d love to hang out with him and see what he was like as a person.

Having spent the past few summers in London where they have usually two weeks of above 70º weather, I’m looking forward to a proper short wearing summer in the states!

…and now you know why we at HGO have come to love and miss Morgan!