A gentle Santa Ana wind is blowing through LA. I even got out this morning to run my pitiful mile… trying to do it in each city… so far I’m 2 for 2:)

We’re only in town for 26 hours, and it was a busy day, with both Studio Artist and Filene Young Artist auditions. But we got to visit with mezzo RNM (who graciously monitored the auditions and started a petition to repeal the 2-summers-only rule for WTOC), pianist NS and ex-WTOS-Manager-turned-rockstar LA Opera administrator JadaBoy. Thanks to CameraMan, we’re pictured on the roof of JadaBoy’s very cool loft apartment building. 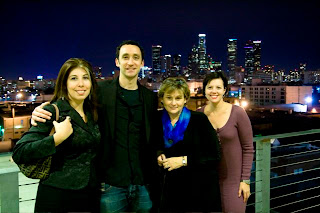 More Q&A
I’d love to sing Salut a la France for auditions. I’d really like to do Par le rang first and then go into the aria in order to show contrast. However, with the recit and the repeat… well, it goes too long. I was planning on doing Par le rang and then going into the aria and taking the cut. However, this means I don’t get to go back and sing the aria with lots of fun, showy stuff. Should I include some fun stuff in my cut version of the aria? How would auditors like to hear this aria and recit?

If you can stand making the cut, do it. If not, at best you certainly would not be asked for a second aria (at least not most of the time). And, at worst, auditors might get cranky about being saddled with such a long scene. I understand the frustration at not being able to include everything, but I guess I’d try to resist the temptation.

Kim, I know that the question and answer section is over! But … I was wondering, can you give some examples of what you heard in these auditions, and what you, as a coach, might have told these students? For those who don’t know, do you allow emails to be sent to request feedback?

The answer to your first question would have to be thoughtful, and I only have enough brain power these days to attend to the casting and programming tasks at hand. I promise to tuck this inquiry away and try to return to it at a calmer period. As for feedback, we do accept audition comment requests submitted between January 1 – February 15, 2009.

A couple of rare-ish soprano arias that have been offered and heard to good effect in the last couple of days:

Posting from my mobile office at LAX where I’m trying to back up audio and video files, import my colleagues’ audition comments in the database, update and blog, and tweet. (Who said Twitter was a good idea???) Hoping that 2 days in San Francisco will be a little less hectic!

The aria from Floyd’s Cold Sassy Tree…. was that offered by FYA or Studio or by both?

The Floyd aria was offered by a FYA candidate.