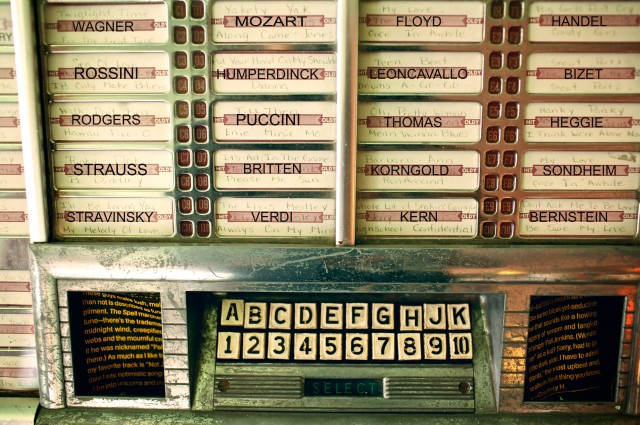 This beautiful June 13 had among its riches our interactive and one-of-a-kind Aria Jukebox concert. Before the performance, the audience and artists gathered for wine, cheese, banter, and good-natured lobbying for favorite arias. Participants put their tokens, coins and $20 bills in the jukeboxes to choose which pieces each singer would offer. (It’s been suggested that we roll out Apple Pay next time:)) The result was the program below. The audience did such a fabulous job of picking a varied, stimulating and beautiful set of songs that I think I’m going to crowd-source every program I put together from now on!

At the end of the show, we featured a “Company Choice” selection, in which the artists and staff of WTO requested one aria from among the remaining 57 that weren’t selected by the audience. The result ended up also being an audience favorite: Puccini’s “Nessun dorma” from Turandot (sung by tenor Robert Watson.)

Tomorrow is another busy day, for Figaro gets married (again.)

The program and singers get more exciting every year. We always anticipate the Juke Box and thoroughly enjoy the afternoon. Looking forward to Figaro this week.