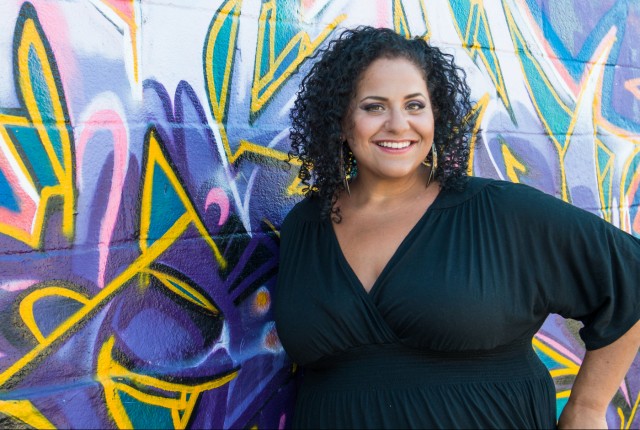 During the 2015 season, the blog will feature interviews with our Filene Young Artists. Today, we hear from mezzo-soprano Jenni Bank, Marcellina in The Marriage of Figaro and Samira in The Ghosts of Versailles.

I have always wanted to be a singer and my parents say I was singing before I could speak.  When I was a kid, I would listen to whatever was on the radio over and over until I could sing it exactly right.  My parents talk about me singing “Rhythm is Gonna Get You” (Gloria Estefan & Miami Sound Machine) and I remember being particularly excited when I realized I could mimic all of the runs and hold the final note as long as Whitney Houston in her rendition of “The Greatest Love of All”. Both of those songs were popular when I was about 2 or 3. The opera part came later.

I was fortunate enough to have a lot of really technical and wonderful voice teachers at an early age. I remember in one of my first lessons with my college teacher, he was explaining something very technical and showing me graphs and charts and diagrams about the physics behind the tongue position we were working on (or something like that) and I was probably a bit overwhelmed or glazed over for a moment.  Suddenly he stopped and he said that the reason we work on the technique is so that we know, technically, how to use the voice to create drama and emotion.  “You can’t sing if you’re crying,” he said, “but you have to know how to make it sound like you’re crying. That’s why we practice and rehearse.” This has always really stuck with me.

I really don’t know. I have been singing since I was so young that there has never been another option for me. I don’t really think that I ever made a conscious choice to go into this career, it chose me (sounds cheesy but it’s true!).

I love all kinds of music! I grew up singing pop, jazz, musical theater, r&b and gospel.  I love finding new folky singer/songwriters and rock bands to listen to. I don’t get to do it often anymore, but I love getting up and belting out a number with a band.  I also have a weirdly good memory for song lyrics, so I make a great road trip buddy. I love karaoke.

I am lucky to be working on two roles for this summer.

Marcellina is a role I have performed twice before. It’s always a joy to repeat a role, because you are able to find new aspects of the character each time.  For her, I’m excited by what new ideas will come up with this particular cast, director, and production. I really feel for her…she is slightly past her prime, desperate to be loved, and has an interesting past – I think those are things that many women can relate to.  As a mezzo, I play a lot of “character” roles and I always strive to make them real people, not just caricatures of “old” or “sad” or “mean”.  There is a reason whey she acts the way she does, and I think finding a moment to show that she is an actual human, despite the facade with which she faces the world, is really important to the role.

The role of Samira is brand new to me and I can’t wait to see what we do with the scene.  There isn’t very much information about her as a person in the score, so that leaves a lot up to interpretation. I’m trying to do some research and come up with some ideas so I’m ready for anything.  I am particularly excited to sing this music – the improvisational, middle eastern inspired style of her music is something that I grew up hearing a lot of at home, as we listened to a lot of Israeli music, so it feels familiar to me.

I genuinely love all aspects of preparing a role. From marking a fresh score with hi-liters and tabs…to staging rehearsals…to performances…I really do love it. However, my favorite moment of the process is often the Sitzprobe.  It tends to happen right when you are starting to get a bit tired and maybe unsure if what you are doing in the rehearsal room is “working” and then, suddenly, you get to sing the music with a full orchestra! For me, it never fails to completely reinvigorate.  It’s a really big reminder of what a cool job we have.

As much as I love traveling and seeing the world, sometimes it does get lonely when you don’t know anyone in that town or at that gig.  And it’s particularly hard when you miss your best friend’s wedding or a holiday with your family.

What’s the most exciting thing you think is happening in the opera industry today? The most discouraging/challenging thing?

I am constantly excited by my colleagues.  There are so many amazing voices and talented performers out there that I cannot possibly buy into the myth that opera is “dying.”  To this end, I am also excited by how much new opera is being performed and commissioned.  Of course, the standard repertoire is amazing and we have to keep performing it, but I think that the art form also has to grow and develop.  Some of the best performances I have seen in the past few years have been of new operas.  I didn’t always love the pieces, but I did leave feeling excited for the art form, moved in some way by the story, and impressed with the work put into the productions.

If you could change one thing about our art form and/or industry, what would it be?

I worry that the art form is becoming too focused on who looks perfect in High-Def.  I just want to hear amazing singing and see an engaging performance.  I don’t really care if someone’s pores are too big.

I like how opera is a culmination of so many cool things.  The plots are taken from historical events, mythology,  or from a novel, the sets and costumes and makeup feature creativity in the visual arts, there is an orchestra filled with instrumentalists playing amazing music, there is virtuosic singing of the highest caliber without amplification, acting, cool lighting, drama out the wazoo…it’s like everything wonderful in one place!

So many roles on my list! Basically everything Verdi wrote for mezzos.  I really want to sing Eboli in Don Carlo(s) one day.  It’s my favorite opera – amazing music, political intrigue, fascinating historical figures, love, murder…and a Spanish-style veil song!

I have a lot of people who I look up to, but I always go back to Ella Fitzgerald.  She is my favorite singer of all time, in any genre.  The ease of her delivery, her musicality, and her use of text are just unparalleled.

Verdi. He wrote so much for voices like mine! I just kind of want to say “thank you!”.

From my experience, summer festivals are always kind of magical. You really get to bond with your casts, production teams, and fellow young artists in a way that not every gig affords and I’m really looking forward to working with everyone.  Also, I’m going to have the privilege of spending two months in a beautiful place, singing beautiful music….sounds like perfection to me.

This is a well thought out balanced interview of a lovely lady! I especially love that Ella Fitzgerald is your beloved singer. As a singer and teacher myself, I always try to get close to her freedom, immaculate diction and ease. She is superb.

I saw your Samira this afternoon in The Ghosts of Versailles. You blew me away. Your acting, the way you mouthed every syllable with such relish, used your eyes and every subtle nuance of expression, timing and voice to excite the audience and bring your character to life were mesmerizing. Then when I thought there was nothing more possible, you wowed us with your ululating, as though you had been doing it all your life. Stupendous!!! There are no words sufficient to do you justice.