We have discovered a new use for Facebook. Rahree casually mentioned on her FB status that the hotel seems intent on putting decaf coffee packets in the rooms. And that it was having a deleterious effect on her morning. Fast forward a couple of hours to checking into the Wortham Center for today’s auditions, at which point our gracious auditions monitor SA presented us with 3 venti coffees. Wow. Maybe we could just mention the need for caffeine as we go around the country and have people just show up at the audition site with it. (Just kidding.)

Speaking of monitors, we are using a lot of singer friends as auditions monitors this year. So far LB and SA have been huge hits all around. I guess it makes a lot of sense to have someone in charge outside the audition room door door who understands what it’s like to have to walk through that door. Thanks, guys. 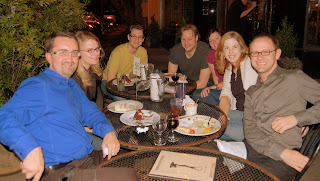 We ended the day with a lovely dinner and meeting of Trappers at the Empire Cafe. One of the best parts of traveling around the country in November is getting to catch up with friends. By evening the humidity had vanished, my hair had returned to its normal size, and it was a great night to be outdoors. Thanks to all, especially to the Yellow Bowl Bakery for the apple butter and orange mocha brownies that will somehow fit into our suitcases!

We began the day with a fearsome Gilda at 10am. She suggested that we do a study to figure out what time of day most of the successful auditions are held. Hmm. I’m afraid I don’t want to go there, but I suspect the outcome might be far more random than one would suspect. Nevertheless, kudos to her for embracing the coloratura stratosphere at that hour.

I’m going to try to keep up with some Filene Young Artist statistics in each city. Here’s the profile on Houston, TX:

New applicants made up 67% of the pool.
Of those, 53% were scheduled for an audition.

Singers who auditioned for us in a prior year made up 23% of the applicant pool.
Of those, 82% received an audition.

Singers who were previously denied an audition made up 10% of the pool.
Of those, 80% were scheduled for an audition.

We’ll see if the numbers mean anything by the end. For now, what they’re showing is that there is no magic bullet to getting through the screening process. I hope that doesn’t mean we’re random. Rather, I prefer to think that it’s the result of looking at every individual scenario in the context of the other applicants’ strengths and experience, then deciding who it makes the most sense to hear this year. I don’t know it that’s reassuring or damning, but there it is. 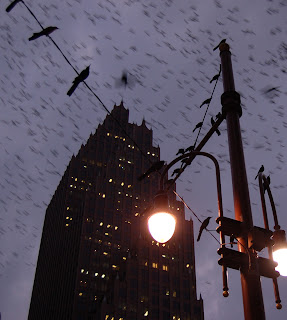 These Houston birds are a force to be reckoned with. They’re called grackles, so I’ve learned. (As in, when they poop on you, as they did on Rahree, you are said to have been grackled.) At sunset it’s like something out of Hitchcock.

ha – fearsome is a new adjective for me! I start Fledermaus rehearsals at 10 am today, and there are high D’s galore – so it’s nice to know I can do it at that hour! It was GREAT to see you guys – best of luck with the rest of your tour.