I swung by the Barns midday just to check on StageMan, our intrepid Lighting Design/Production Manager. He wasn’t there, but the empty stage was. Everyone needs an empty stage stage. A pause to clear it all out and clean it all up. And start fresh. 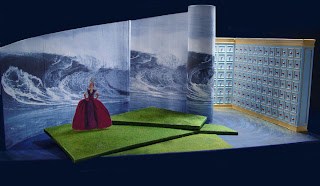 But for now it’s full of possibility. As was my Thursday until life happened.

I had a wonderfully simple list for today. Two big jobs that should’ve been accomplishable in 9 hours: finish editing the supertitle script for Alcina and dig into revising the budget and contract for an upcoming project. Need I tell you that I didn’t start either one?

Here’s a sample of what got in the way.

Who What When & Where
Put 42 people, 2 operas, 1 class, 9 costume fittings, 10 coachings and 1 concert into 5 spaces in 10 hours. It’s largely Super Intern’s job, but I’m supposed to help problem-solve and proof. It took 5 people 3 hours, and we still made 2 mistakes. Bob Fincheimer is supposed to be writing a computer program that makes this easier. Hurry up, Bob.

Microphones
Candide. Who wears a wireless mike, who hits the mark in front of a wand, and who just has to sing loud. So glad I work in an art form where these things come up infrequently.

Describe That Show in 10 Words or Fewer
Ad copy was due at 3. I swear, I hate marketing. I couldn’t sell anything to anyone if my life depended on it.

Picaresque, Indeed
Had to revisit the Bernstein DVD of Candide because I’m perpetually confused about which plot elements of this crazy story are intact in this Scottish Opera concert version. I got completely derailed by staring at 36-year-old Jerry Hadley and wondering what in the world went wrong.

Bum Bum Bum
Tried to conjure up 1994, to remember exactly how the gentlemen in that concert split up the “bum bum’s” in the Schoenberg Spiegel song. Gave up. Called Steve.

Bobachino and Bobachina
Tried to brainstorm with Composer JM on voice types for two crazy characters in the next new opera.

Star of Tomorrow. Ugh.
A well-meaning phone call from a publication looking for us to name a WTOC alumnus/alumna with a DC-area connection to be included in a next-generation-of-star-performing-artists piece. Don’t get me wrong, I’m thrilled and flattered to be consulted and included in such an overview. But hand-picking a singer who’s going to outshine the rest is like betting on a horse race. And I’m not a betting woman.

November
The fall audition tour is 5 months away, but already, venues are scarce and flights are horribly expensive. 15 years ago we didn’t even set up the audition tour until September. Now June seems too late.

As of this Sunday, 7 weeks down, 7 to go in this season of 2008. Never mind that the next 4 weeks are the hardest of the lot. It just helps to know that we’re on the downhill side!

LOVE the Alcina set! Makes me very sorry I’m not going to be in the country to see Eric’s production, but I’m sure it will be stellar.

I’ve long admired you as a musician (and occasional employer!), and your writing is no different. I’m fairly new to the blogosphere, but yours is one of my “must reads”! Thanks for continuing to share the opera world in such amusing-but-realistic ways – I think many of us opera-types who do so are determined to let folks see a glimpse of what it’s REALLY like offstage and behind-the-scenes, but you do it so much better than most of us….!

Thanks for a brilliant read!