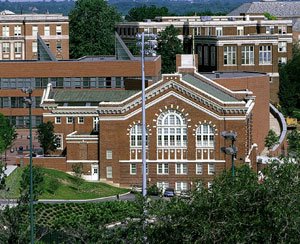 The last day of the audition tour dawned with a palpable sense of fatigue. But the level of singing in Cincinnati was so reassuringly high that the day flew by. A few real surprises – probably the biggest percentage of the entire tour. CCM always welcomes us so warmly, and their facilities are among the best in the country.

If J. Alfred Prufrock “measured out [his] life with coffee spoons”, then we have measured ours out with opera arias. There’s a curious rhythm that settles in during a full day of auditions. Just as my kids and their friends used to measure time by saying an event took “three Simpson’s (episodes)”, I now have an internal clock whose units of time correspond to the Catalogue Aria, Dido’s Lament, and Musetta’s Waltz. Whenever I think about the prospect of spending a solid six hours of wall-to-wall arias, it’s more than daunting. But the truth is that a rhythm sets in, and the day flies by.

I’m back home now, facing the usual backlog of laundry, mail, and phone calls. I’m always surprised by the wallop of mental fatigue that hits right at about Thanksgiving. All by way of saying that postings will be scarce this week. I’ll try to catch up on Wednesday, then go into a tryptophan-induced turkey coma until next week. You should do the same.

It was a little strange to be recognized by singers and other colleagues all across the country. Noticing my startled reaction, they usually explained that they saw my picture on this blog. Thank you, Lisa Kohler, for making me look even better than I do on a good day!

For those of you who are reading primarily for audition information, stick with us for another couple of weeks as I tie up loose ends. And take this opportunity to ask me any questions you have about auditioning. Send an email to wtoc@wolftrap.org, and put “Blog Questions” in the subject line.

And thanks to all of the Blog Cheerleaders I’ve encountered. It’s a tough thing to keep this up and do my real job as well. If it were just a whistling into the wind exercise, I’d abandon it quickly. But I hear regularly from teachers, singers, colleagues and patrons who say that we’re making an important contribution, and that keeps me going, at least for now!

There’s a huge backlog of notes from the audition tour that have yet to be translated into blog entries. I’ll chip away at them over these next few weeks.

Where Do We Go From Here?

December 2005 & January 2006: An audition tour summary, and an analysis of the scheduling and casting processes that will consume us over the next 6-8 weeks. My “Young Artist Development” and “Artistic Director” hats.

February & March 2006: Pre-production. Getting the season ready. Deciding how it will play out, how we will pay for it, how we will advertise it. Artistic Administration, Finance, Development, Marketing.

June – August 2006: The summer 2006 season. The best plans have been laid. Now it’s all about active response.

Audition Tour Wrap-Up By the Numbers

love the blog! keep it up!