A few weeks ago I started getting responses to the unedited audition comments that I’d begun to post. Some feedback came in the form of posted comments (anyone can comment on an entry by clicking the link at the bottom), some were emails sent to my address (see right), and others were posted on forums and other websites.

There were quite a few encouraging responses, and that was a great relief. I had debated long and hard before including these comments on the blog, but ultimately decided to go for it for the following reasons.

I filter (“moderate”) the comments to this blog, which means that I see them before I allow them to be visible from the website. I’ve only witheld a few. Many bloggers won’t publish anything that is signed “Anonymous”, but I realize that singers and colleagues may have legitimate gripes with a posting but be justifiably afraid of saying so and signing their real names.

Now, I realize that most of you don’t know me. But the craziest part about this is that I’ve been struggling all my life to have the courage to speak my mind, believe in my instincts, and be convinced that my opinion has any value. And any of us who last more than a few minutes in this business have to have a healthy ego. But drama queen? I wish. I can’t even throw a diva fit when my life depends on it.

Of course, the whole damn blog is about my opinions. That’s the nature of the beast. If this were a third-person, just-the-facts narrative, no one would read it. But in finding out that readers believe I am boorishly overconfident and pretentious, I realize that I’ve come a long way. And probably saved myself thousands of dollars in therapy.

Anyway, in spite of my brave defense, I’ve been scared off just a little. For sure won’t post any more comments, and will probably be a little gun-shy for a while. But I’ll get over it.

Recital with Alan Held last Friday was one of those nights that’s all about the music. I’m not prone to jitters, but I usually have to battle several crises of confidence during any given performance. (Did I really mean to choose that tempo? Was that dynamic choice too indulgent? What was I thinking??) But that little evil voice inside my head was quiet. Probably because I’d been so sick that I was just relieved to be there at all. And because my colleague was so calmly and unswervingly confident that I didn’t have to absorb any free-flowing anxiety. And because I was so giddy that all of the various bells and whistles in my pre-show talk (video, wireless audio, iPod, PowerPoint…) functioned flawlessly. 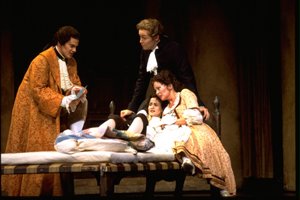 production of Figaro in the Filene Center in August – the first time in over 25 years that we’ve built an opera production for that theatre. If you’ve followed the Filene Center opera discussion that we started last summer, you know that we’ve had our challenges. But this approach will allow us to take artistic ownership in this production in much the same way that we take great pride in all of the new productions we do for The Barns. And, believe it or not (and it does strain credulity), we’ll be able to do it without spending any more money than we did to rent.

Excited about Figaro, as I always am. I’m as weary as you of the Mozart hype, and I get impatient with the “timeless masterpiece” approach. But I’ve done 8 Figaros, and each time I enjoy it more. Reading about David McVicar’s production that just opened at Covent Garden has further whetted my appetite. Lots of people disagree with him, but I’m totally on board. The legacy of the play is revolutionary, but the primary experience of the opera is about the people. I started out with Figaro as a newlywed who shared Susanna’s excitement; I returned to it many times to cry with the Countess, and now I’ve moved on to Marcellina.

Didn’t mean to go on that long… plenty more where that came from… back in a few days!

I’m terribly sorry to hear that you won’t be posting your comments on auditions anymore (at least for a while?).

It can only do us good to know what’s REALLY going on in your head when you listen, and frankly anyone who can’t take a criticism honestly and knowledgeably offered needs to go find another profession, or a shrink, or both.

And no, I never got into Wolf Trap, although you were delightfully friendly back when I was auditioning.

I have to second bella figlia – those audition comments were incredibly helpful! Especially because they weren’t connected with names, they were “safe” to discuss among singers – in fact, I sent the post out to a number of my singer friends… remember, it’s the number 1 question at masterclasses: “what are you actually thinking while we sing?” We are dying to know this stuff!

It is the unfortunate nature of our profession that we are hired for our opinions (ours as artists as much as yours as an administrator), and that some people will inevitably disagree with those opinions. Blog comments allow a method of feedback that feels (and often is) more anonymous than a face-to-face shouting match, or an email. If you ever wanted to know what people were thinking and saying about you when they received their rejection emails, blog comments are the way to find out.

Ask Chicago Canadienne about that. She found herself so inundated with audience and critical commentary on her blog that she had to take a hiatus. Some people apparently disagreed with her choices as an artist, and voiced their disagreements on the blog. The truth is not that the blog or the posting created those disagreements, but that the blog comments provided a window into those disagreements that were already going on, and Canadienne didn’t like what she saw in that window. The truth is (as I think Canadienne found), closing the blinds doesn’t make the commentary go away.

Stopping the audition comment posts will not eliminate the jerks, the delusional nutjobs, or the people who legitimately disagree with your decisions. It will only allow you to pretend that those people don’t exist, while depriving the rest of us of the incredible resource your comments provide.

I don’t mean to imply that “you owe it to us” to take abuse for the sake of the resource this blog has become… but surely there is a way that we might avoid throwing the baby out with the bathwater… perhaps disable comments on certain posts? Or require people to be registered bloggers to comment?

full disclosure – I didn’t get an audition this year, though my delusions tell me it’s because I didn’t send in my work visa info in time. :) I have a lot of respect for the work that you do, and I hope that you continue to allow us this window into your brain.

Well, the comments you published were no surprise to me, here in Germany we get these things said right to our faces! However, I also know from experience that blunt auditions comments are not always helpful to the singer even if well meant. Basically, if the auditioner says only *something* negative, this means to me that I sucked majorly. (Yes, you may call me sensitive…LOL)
And no one can change my mind about this, so yes, I have problems hearing negative things being said to my face. If the panel says they won’t hire me, that’s all I need to know about how I did, basically. ;-)
– Again, that’s just me.

I don’t think people really appreciate the value of honest audition feedback. At the professional level, it’s tough to ascertain what the panel really thinks at a time in one’s career when honest feedback is what one often needs the most.

And those who audition at the professional level should have a thick enough skin that if they hear feedback that they don’t appreciate or agree with, simply file it for future reference and move on.

Kim, I’m a singer, although not one who would audition for your program (among other reasons, I’m a teeeeeeensy bit over the age limit). But I continue to study voice and want to improve my ability to be a good performer, and I find comments such as the one you posted helpful. You’ve posted a lot already, so if you don’t do more, I can’t blame you in the least.

On a slightly related topic – are you planning to write about the Met Regional Auditions you helped adjudicate? I was there (paid for my ticket), agreed with the first prize – all the singers were excellent, so I can’t complain about the others, though I’d have done differently. But what I’m interested in hearing about are, without naming names or violating confidences, what were the combination factors that determined the decisions. Voice, acting, current ability, potential, age, appearance?

I think it is important for all singers to realize that comments made directly to you or comments that you read on the WTO blog site were made at one moment in time. The person who made the comment might have had a totally different perspective if he or she had eggs that morning or didn’t have coffee (yikes!) just as you might have performed differently if you had taken a cab or the subway to the audition.

A few years ago, the Juilliard Opera Program held a workshop for its graduate level and Opera Center singers. Each singer that participated (about 18 to 22 singers) was asked to sing and than to judge the other singers that performed. Every singer had an assigned purpose for “hearing the audition”: some were grouped together in three’s and were told that they would be hearing singers for a Cosi Fan Tutte at a C-Level company, some were judges at a national competition, other were trying to fill out their management roster, etc., etc..

Everyone sang. At the end of the singing the singers shared their comments with the class. As you can imagine, just about all the comments were different for each and every singer. One singer might have placed first in the “competition” but was not cast in Cosi. Another might have been cast in a role just because their look fit the part. The whole process demonstrated that even if you auditioned consistently well for 10 different companies, competitions, schools, whatever, it is likely that you will get 10 very different comments, ranging from fantastic to not-so-much. In the end, you have to value what you are doing above all else. If you cannot do this, that is fine! Another door will open for you as soon as you close the door that is leading you to this career.

I think it is also important to note that Kim’s comments vary as well. They are sometimes constructive, sometimes not, but helpful to her and her staff to make the correct decisions for their company. If you were cast with WTO but not with Santa Fe was it because Santa Fe doesn’t know what they are doing? No. Sometimes you fit the bill, sometimes you will just watch from the stands.

Kim, thank you for this blog. You are a terrific writer and speak from the gut. Keep it up!