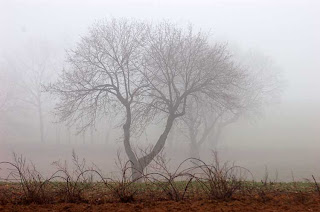 I’ve fallen off the blogging train in a big way, and the thought of returning has begun to intimidate me. Yet here I am. Just don’t expect too much too soon.

I took some real time off at the end of December. Relatively unplugged, and – more importantly – gloriously unhurried. Lately it seems that the biggest hurdle I approach in my daily life is to avoid feeling constantly rushed, breathless, late, panicked-because-I-don’t-have-enough-time…

And yet I know that I have plenty of time. Or at least – as they say – 24 hours a day just like everyone else. Unfortunately, I, like so many of you, persist in believing that if I play my cards just right, I can cram more into those hours than is really possible.

It’s a game, and it’s almost too bad that I’m pretty good at it. I excel at speed. I exude efficiency. And I wasn’t raised with the Pennsylvania Protestant work ethic for nuthin’. But there’s a tradeoff. Only my left brain allows itself to be pushed. And only the fast parts survive. I can be a blazingly fast linear-thinking, serial-processing, spreadsheet-churning, database-cranking machine. And it appears that lots gets done. Well, I guess it does. But a lot gets lost.

Only when you slow down does the right brain have a fighting chance to be heard through the noise. It’s a tough argument, because until the noise does stop, the right brain stuff doesn’t seem important. In fact, it barely seems to exist in the daily check-things-off-the-list hubbub. So what if I haven’t had a truly creative impulse in months?

But when it creeps back, the world is different. Colors are brighter, ideas are clearer, people are dearer, music is sweeter. OK, it even sounds sappy as I write it. But there it is. To edit would be to allow the left brain to exert dominance :)

So here we are, blogging in 2009, and already making little sense. There may be a brief digression from recent typical post content, with far fewer lists, analyses, and statistics. But if you’re one of the students who visit here regularly (or even if you’re just another hopelessly linear thinker who’s not stuck in academia), stick with me anyway. There are things to talk about.

Welcome back to blogging. I look forward to reading whatever you put up here!