My old VW Bug used to idle fast on occasion. Spinning its rpm wheels for no good purpose. I spent the entirety of my recent time off work slowing down my internal engines so it didn’t feel as it I was spending my life on speed. And it has taken me almost exactly 10 days to lose all of the ground I gained. What is it with this speed addiction?

I feel like Christopher Robin in his “Bisy, Backson” (Busy… Back Soon…) mode.

I’ve been following Jason Heath’s “Virtual Master Class” project over at the Double Bass Blog. (I like Jason’s writing, and I found the blog because my son plays double bass. In case you were wondering.) Players submit an audio file for consideration, he posts it, and anyone can listen to it online and give feedback. I wonder if such a thing would be interesting (or helpful… or entertaining) in the opera world.

We are working feverishly on plans to fund and carry out a professional recording of this summer’s Volpone production. I have spent an entirely inappropriate proportion of these last two weeks speaking to producers and record labels. Now mind you, I know nothing about the business or mechanics of making a professional recording. Inarticulate doesn’t begin to describe the level of my ignorance on this subject.

My colleague Chris has loaned me a number of music industry books that I dig into feverishly after each telephone conversation with a recording professional. Master use license, statutory royalties, digital distribution rights, mechanical royalties… You get my drift. Perhaps if I had a legitimate music industry or arts admin degree, I’d know these things.

Anyway, my own personal raid on the inarticulate proceeds apace. If it makes it possible for us to get a good recording of this marvelous opera out there in the world, then it was well worth it.

(P.S. If you have any advice, my email address is at right. If you want to send money, I’ll come collect it myself:)

I heard a terrific radio interview with R&B singer Macy Gray this week. She was talking about the difference between singing and acting, responding to a leading question that seemed to indicate that they might have similarities. Her answer was so quick and unequivocal that it made me think hard. She allowed that singing was easy because all she had to do was let herself out. Acting, on the other hand, demanded subjugating all of those deep-seated personal feelings and becoming someone else. (Yes, I know where you method actors are going with this, but I’m making a somewhat sweeping point so I can get to the main event.)

Assuming that there is truth (and I believe there is) in both of those statements, the tension in the job of the singing actor becomes clear. It’s so hard to explain to a performer that in order for us (the audience) to feel, it’s sometimes important that the singer not feel too much. The most potent emotion, when felt deeply and indulged in thoroughly, will not necessarily make it past the footlights. I am in awe of those singers who manage to be true to themselves, use their personal resources wisely, and yet allow the audience to be the final repository of the message.

On a more technical level, Daniel Helfgot talks about the “third line” – an interpretive “answer” to the two parallel lines of music and text; a result of their combined meaning. Just as these two elements don’t reach combustion until they’re fully informed of one another and completely integrated, the synthesis of character and emotion really isn’t fully formed until it’s sent out to another person. That’s why confessional singer-songwriters (whom I adore, and who I always wanted to be…) have the most resonance with a listener who has shared the specific life experiences about which they sing. But a truly exceptional singing actor can take a seemingly random and foreign circumstance (i.e. most opera plots) and sent the essence of it straight into our hearts.

OK, I’m not even going to go back and try to edit all of that. Apologies for whatever circular logic or non sequiturs it contains. :) 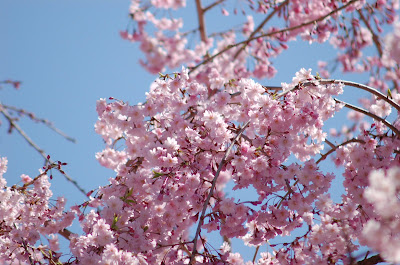 They promise that spring will return to the mid-Atlantic this weekend. And they better be right. See you in a few days when the mercury tops 70!

Thanks for the link, Kim! I enjoy reading your blog (I’ve got the RSS in my Google Reader), and I appreciate you pointing folks to the virtual master class project that I’ve started there. To me, the blogging/commenting setup is perfect for this sort of thing. Thanks again!