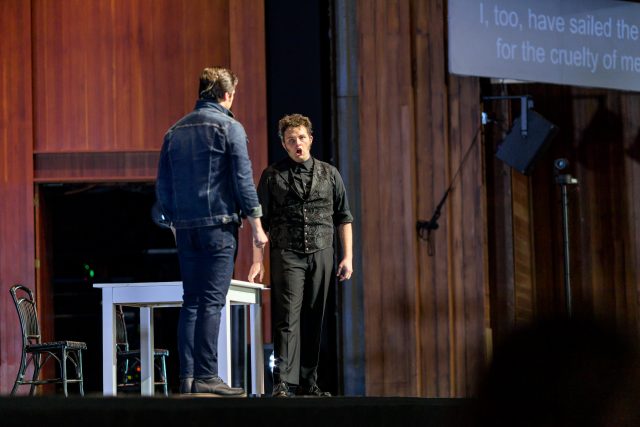 WTO had a big week last week, with the classical emphasis for the 50th Anniversary concert, Fifty Years Together: A Celebration of Wolf Trap and two performances of Sondheim’s Sweeney Todd, the Demon Barber of Fleet Street in Concert.

The weather at the beginning of the week was oppressive: hot and humid, and hovering relentlessly in the high eighties/low nineties. For an outdoor theater like the Filene Center, the weather can make or break the rehearsal and producing experience – everything is easier when the weather is nice, and by the same token is more difficult when the weather is uncomfortable. And honestly, I spent the first part of the week flashing back to our 2011 production, when the temperature at curtain was 107, with a heat index/feels-like temperature of 117.

But on Wednesday a line of storms moved through the region. The first set happened as Cynthia Erivo was expected on stage for her mic check; the second set blew through as pianist Joyce Yang and the National Symphony tackled Chopin’s Andante spianato and gran polonaise. (I’ll be talking about that night as an example of focus for many years I’m sure!)

After the storms, the weather settled into a truly lovely, cool, low-humidity pattern: if you had asked me, it felt a little like the weather gods had picked us up and transported us to my industry colleagues’ theaters in Cooperstown NY or Aspen, CO! But it made for two thoroughly enjoyable performances of Sweeney.

Over the last three nights, I have been awed and delighted by the energy rolling off the stage from our ferocious performers, and for the amazing reciprocation (and amplification) of that energy by the audiences. The exchange was palpable, and truly epic. This shared experience, the tidal wave of attention and energy between artist and patron…I truly didn’t realize how much I had missed it until it crashed over my head again and again over the last several nights. (As a self-proclaimed introvert, I wouldn’t have thought that being in a big crowd of people was even my jam after the last year and change!)

We’ll get to revisit Sweeney one last time on Monday as the cover cast runs through the performance. And we have two virtual offerings this week for your entertainment: a Salon Series performance on Friday July 9, and the airing of YOUR Aria Jukebox choices on Saturday  July 10. Both performances will go live at 7pm, and you can tune in by going to our webpage.

We’re deep in rehearsals for our last operatic project of the summer, the double bill of Viardot’s setting of Cinderella, and Holst’s setting of Sāvitri. If they’re unfamiliar to you (which they might indeed be – they’re rare to find in performance), we’ll have a few snippets of the music for you to hear on this week’s installment of Little Lunch Music at noon on Tuesday.

We are indeed adding additional 2-person pods for Cinderella/Savitri!