Felt good to be a semi-functioning member of society again. A few hours was about all I could stand, but it’s a start.

Alan endured a delay-ridden drive to Wolf Trap this morning, and we ran through the entire program this afternoon. Ended up making some tweaks to the order to help with the pacing, and actually struck one number because the first half was running way too long.

The Program – First Half

For Alan, this concert is all about coming home. He’s developed a program that’s full of terrific music, to all of which has a personal connection. He was a young artist here in 1987 and 1988, during a period when I was a Wolf Trap staff coach and pianist. His housing hosts from that period have become life-long fans and friends, and he’s been back to the area on a regular basis for work with the Washington National Opera.

We start with “Caro, mio ben“. (Alan’s college audition aria:)) Those potent 17th-century Italian songs shouldn’t be the sole province of students – they’re far too beautiful. Then on to “Pietà, signore” (he has a great story to tell about this one), and an excerpt from one of his Wolf Trap roles – Leporello’s Catalogue Aria. And for those Wagner fans, one of his current signatures, Amfortas’ Prayer from Parsifal.

Alan loves Carl Loewe’s story songs, and I’m glad he’s introduced me to the quirky “Tom der Reimer“. Mahler’s “Der Tamboursg’sell” (“The Drummer Boy” from Das Knaben Wunderhorn) is touching and tragic, and it presents a humbling challenge for the accompanist: how to make a piano represent substitute for an effective orchestration. I’ve eschewed both available printed piano reductions in favor of my own hybrid interpretation. Something I wouldn’t have had the nerve to do years ago, but I 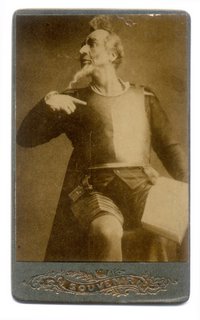 seem to be getting reckless in my old age. I’ve been researching drummer boys and have a new perspective on the piece that breaks my heart.

Then one of my favorite groups; three of the songs that Ibert wrote for the bass Feodor Chaliapin to sing in the 1933 film of Don Quixote. Not just a consummate musician, but a fearless actor, Chaliapin played the title role in three different versions of this movie – one each in English, French, and German. All this from a Russian opera singer. We’ll end the half with Alan’s Wolf Trap audition aria “Quand la flamme de l’amour”.

Lots of “remember when’s”. One of my favorites involves a Butterfly production at Washington Opera in the early 90’s (I think) during which a young Alan Held was brought in at the last minute to sing the Bonze, and I was assigned assistant conductor duties on stage left.

The Bonze’s entrance is full of atmospheric gong sounds, achieved by the percussionist from the orchestra leaving the pit and coming up to the stage left aria to bang a huge gong. Yours truly had the responsibility of cuing said percussionist.

Well, I knew it would happen eventually. The percussionist came upstairs without the gong mallet. He ran back downstairs but didn’t have enough time to make the trip. (Opera waits for no one.) I told Alan/Bonze to pay no attention to whatever god-awful sound should emanate from the gong as he made his entrance. And I took off my Nike, flaunted all the union rules I’d been taught, warmed up the gong and whacked the hell out of it.

Details on the second half tomorrow.

Somehow those of use who have had assistant conductor duties backstage should put together a book with our belly-laughing stories like yours!