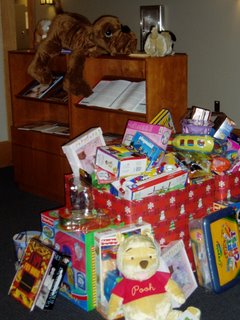 But First,
the
Really
Important
Stuff…

Toys for Tots
collection at work.

A few responses to some of the challenges posed to my previous postings on the Juilliard master class event:

I acknowledge that the star artist behavior in most master classes is neither brutally inhuman nor more abusive in general than much of the rest of our lives.

If performers are not able to develop a bit of a thick-skinned approach to all sorts of criticism, they will either not last long in this business or they will have particularly tortured careers.

There are many paths in life that are far more difficult and ultimately less rewarding than a career in the arts.

If I’m having a bad day, one of the first places I go on my iPod is Barbara Cook singing “In Buddy’s Eyes”.

Once again, there’s an equation. Emotions, frustrations, and all defenses aside; the net result of a master class experience should simply register on the positive side of the ledger. The lessons learned and insights gained may come at a price. They usually do. But the costs should be in proportion to the benefits.

What are these costs? Well, as an administrator, the real expenses are never far from my mind. I’m not just referring to dollars, but to the human resources that go into preparing for and managing an event like this. As a coach and teacher, I’m aware that time and energy are always at a premium and should not be misused. And, as a performer, I resent public performances (and indeed, that’s what these singers are doing in master classes) that sap rather than feed me.

The audience generally has a very good time at these kinds of events. Actually, the audience’s ability to get a glimpse inside our process is often the solitary benefit of a master class. They come away with a new and stronger connection to the music and to the mind of a performing artist. And this audience benefit is important on many levels.

If we were to be honest and put our singers up there with the knowledge that they’re acting out a script for the benefit of the public, that’s one thing. Give them a role to play, and send them home with a paycheck for doing their part for the visibility of the institution and the adoring public of the artist. But to expect them to take risks and to make a huge investment in the outcome is wrong.

But first, to put these singers in perspective: They are not wringing their hands or giving up their careers. They’re tougher and more realistic than that. But their feedback is important.

“I was nodding but in truth I had absolutely no idea what she actually wanted me to do. So I just tried one thing after another, randomly, and I was just more and more confused.”

“I didn’t even get a chance to do anything before I was being judged. It offended me.”

“I came onstage with a real connection to my song. But from the minute I had to sit in that chair and hold some guy’s hand, I was just faking it, anything to get through the next twenty horrible minutes. I felt nothing, and I gave nothing.”

“Oh, you just humor her, play along. Whatever it takes. In real life, I am never going to go onstage without a mike in a 950-seat house and not sing out, so the whole thing was meaningless from the get-go. You want me to mutter, I’ll mutter.”

“I learned two things. One: I can sing while I am crying. Two: I shall never sing musical theater again in my life.”

A Voice of Experience

Until now, you’ve heard from me (more than enough, I’m sure) and from some of the Juilliard students. I’m a grownup (or as much of a grownup as I’m ever going to be), and the performers’ responses are thought by some readers to be tainted by their youth and inexperience. I don’t agree, but bear with me here.

I’m indebted to Steve Blier for allowing me to post his reactions to this event. Steve needs no introduction to those of us who work with and love song. But if you don’t know his work, here’s an introduction.

Steve works with these and other professional singers on a daily basis. He suffers no fools, as they say. And he was extremely disturbed by the master class.

“We knew it was a sham when the following happened. Alex Mansoori got up and gave a deeply touching, modest, and heartfelt performance of an Ahrens and Flaherty song. He knew exactly how much pressure the song could take, and he didn’t push it too hard. The audience was rapt, and many of us were in tears. Barbara waits for a moment and then says, “Honestly, I don’t know where to start. You don’t know how to use language, you sing it like ‘Nessun dorma,’ and…who wrote this song anyway?” I instantly felt slightly sick to my stomach. (I later heard this same reaction from more than a dozen people.) From then on, the students could see that they were pawns in a theater game where they were at a complete disadvantage.

Cook really tipped her hand when she went to get the repertoire notebook Juilliard had prepared for her a month before. It was clear she hadn’t opened the book at all–the music was still clipped together, and she seemed completely unable to remove the paper clips. We all could see that she hadn’t felt it necessary to prepare for the class in any way, though she seemed very maladroit coaching material she didn’t know. So she rips the first song out and says, “All right. Your lyrics say, ‘Take the moment, make it happen, hold moment, make it last…'” Embarrassed silence. “Um, no, Miss Cook. Those are the lyrics to the other song I brought.” It made us wonder: had she even listened to Alex before she went into her pre-packaged rap?

The most distasteful thing about the whole afternoon was Barbara’s pandering to the audience. “Isn’t that better?” “Oh, YES!” comes the Pavlovian response from the fans.

As one student said to me, “it’s always better the second time.” The modus operandi seemed to be: make the student uptight, confuse ’em, rile ’em up, then sit them down in a chair, take them off their voice, maybe remove some clothing, and claim credit for a transformation.

[Sidebar from Kim: The “always better the second time” trick is almost foolproof. The resident expert has to do almost nothing in order for the audience to register a noticeable improvement when the performer has a chance to ground himself, relax, and sing something a second time.]

On the real work of helping opera singers find their voice in the song repertoire:

Yes, some opera singers are a bit stiff and obsessed with volume, but others are amazingly versatile. To educate them, you need to share the real secrets: how to phrase, how to bend a line or a word, how to use rhythm, how to find an interpretation that releases your life-force into the spaces of a theater. It is completely counterintuitive for an operatically trained singer to put out more “emotion” while you cut off access to his musical energy.

We all heard repeatedly that the song was a “journey,” and how the printed page was “just a starting point.” I assure you that this is not news to my students. What might have been helpful would have been to explore the specific journey of a few of the songs, to guide the students through the creative process of making choices, and to help them to internalize and manifest those choices.

It’s not that the advice given wasn’t true – it was simply banal. It’s very condescending to assume that these students are not interested in expression because they’re opera singers.”

“We should never put our students in a position where they are made to feel ashamed of their gifts. We are training our singers to sing resonantly and let their creative energy explode. This is what they need to do in the profession they are trying to enter.

The day ended better than it began: the Vocal Arts students–including several that had been in the “master” class–put on a 70-minute show called “Shall We Dance” in which they sang and hoofed their way through a wide repertoire of popular music. Under the direction of Jeanne Hime, the cast showed such ease with themselves–their physicality and their voices. Everyone in the room felt it: this was the best possible antidote to the afternoon’s effronteries.”

When Steve and I talked about this today, he reminded me that one of the most important things to get across is that we should not believe the whitewashed reports in the press. Something that we media-savvy people think we know, but of which almost all of us need to be reminded.

I’m sure I’ll succumb to the temptation to address this topic again, but for now, it’s all the time I have to spend on it. I’ll be offline for several days, posting again by the middle of next week. By then I’ll be able to be specific about some of the repertoire and projects we’ve put in place for next summer’s opera season. One Mozart (not a huge surprise, I realize, but particularly important since he’s celebrating a big birthday in 2006), one Rossini, and one baroque opera (but not Handel!).

Have a great weekend.

I really like your blog, too. So much interesting information, that perfect blend of personal and professional.

May I put a link to your blog on mine, like Campbell did?

Of course – thanks for the feedback, too.