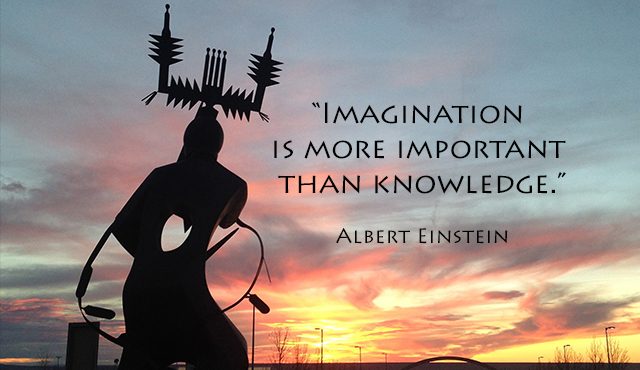 Before we get to today’s #ASQoD*, I want to mention that we’re holding the first of four audition days at the National Opera Center in New York City, and today is the first day of National Opera Week! Take a moment to check out this video message from mezzo-soprano (and WTO alumna!) Denyce Graves.

Yes, Einstein said that. Just let that sink in.

The place where numbers and elements become ideas is not a place I can go. But I believe it exists, and that it’s where scientists and mathematicians become artists. In the same way that beginning musicians wrestling with notes and rhythms can’t imagine how integrated music can be at the highest level; we who are stuck at beginning algebra (at best…) can’t soar with the scientific eagles.

But no matter. Notice that he didn’t say that knowledge isn’t critical. (Uh, if you’re wondering, yes, you should probably go practice.) He simply acknowledged that it didn’t trump the mind’s ability to soar.

Bring imagination into the audition room. Please, for the love of god.

The Audition Season Quote of the Day is a month-long series brought to you by Wolf Trap Opera.