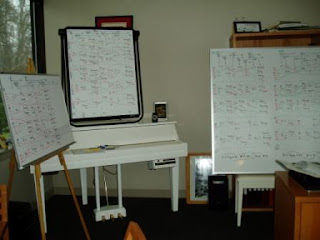 I’m drowning in dry-erase boards. Most of the time, I’m blissfully content with spreadsheets and databases. But there’s something about trying to figure out how an opera season might assemble itself that wants to be played out on a large screen.

So I’ve absconded with most of the large white boards I could find, spelled out various scenarios, and arrayed them around my office. Somehow I have to end up with about 18 singers in 3 operas, 3 concerts, and 5 improv performances condensed into 12 weeks. About 50 assignments, all of which have to be arranged on the May-August calendar grid so that everyone stays busy but not overworked.

It’s difficult to find just the right voice for a blog like this one. I envy my blogger colleagues who are either anonymous (or pretend to be), or at least whose blogs represent only themselves. Writing a blog as a representative of an organization is its own punishment. Of course, it bears a certain stamp of legitimacy. But when I’m going through one of these inevitable troughs of energy and enthusiasm, it’s a tough balance to strike.

So, having a hard time getting through the days lately; much of it undoubtedly due to residual fatigue from the last few months. Posting is very difficult, so I’m about to go into a once-weekly pattern. (Even that seems optimistic, but we’ll see how it goes.) Please do continue to check in occasionally. 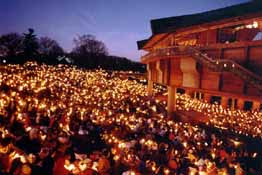 This week was full of many things having nothing to do with opera. Good, in a way, but hard to juggle when we’re under the gun to get our season figured out… and fast! But there are few more beautiful things than the candlelight recessional at the end of the Wolf Trap holiday sing-along. 6,000 people joined the Marine Band and members of metro-area choruses for today’s holiday season kick-off, and it all happened just a few hours ago.

I’ve been doing these Wolf Trap auditions for 13 years now, and I’ve never stopped underestimating the effect they have on me. I guess that every year I think it will get easier. Truly, compared to many difficult things in this world, our little autumn jaunt around the country is a breeze. Perhaps that’s why I’m (annually…) surprised that it takes so much out of me.

At the core, this “talent search” part of our year is a fairly linear, objective thing. And one would think that every year of additional experience and the purported wisdom that’s supposed to come with age would make it easier. Unfortunately, it seems to be taking a bigger toll each year.

First of all, even though I’m sure we screened out many good singers before we held the auditions, I probably should’ve put through even fewer applications. Next year we will either spread the tour out over a longer period (which has its own complications, both financial and logistical) or screen a little more heavily. It’s not something I relish doing (I’ve given up trying to learn how to say no…), but it’s something that may be necessary in order to get through the fall.

A few recent blog comments that deserved a speedier answer than I’m providing.

May I ask for the sake of my peace of mind the percentage breakdown of basses to bass-baritones? That number leapt from last year’s 4% (IIRC), which means that either there are more Bass-Baritones, or I’m in trouble! :)

The record 9% representation of low voice this year broke down to 6% describing themselves as bass-baritones, and 3% as basses.

By my count above, you heard 145 sopranos. I’m sure that’s at least 50% of your audition pool. How in the world do you pick just a couple from that group? Do you find yourself being extra critical of sopranos to make it easier to whittle down — “well, she flubbed those words, we can put her in the NO pile” — or is everyone judged on the same plane? How do the 4 or 5 sopranos that are chosen stand out from the pack?

Let’s break this down.

Are we extra-critical of sopranos? Actually, I don’t think so. We hold all voice types to the same standard. If that were not the case, the same level of ability might qualify a baritone (for example) as a finalist, yet not qualify a soprano. Yet the profile of the successful candidate is remarkably similar across voice types.

In any given year, are there likely to be more sopranos who are qualified who don’t get chosen than in other voice types? A qualified yes. But the discrepancy isn’t as large as you think. And almost every year, sopranos are more heavily represented in our company. (For 2007, it looks as if we headed for something like 5/4/4/2/2.)

As for “she flubbed those words, we can put her in the NO pile”, memory slips are not the kiss of death. We have hired people who forgot something. I do believe it’s possible to tell the difference between someone who had an uncharacteristic memory slip and someone who is skating on the edge because s/he learned the material poorly or is incompletely invested in the performance.

After those encouraging words, I would have to agree that if you’re a soprano, you have to work pretty damn hard to distinguish yourself. That doesn’t mean it’s impossible, though.

Am curious to hear the answer to that question as well. I mean, let’s face it, auditioning as a soprano is automatically different than any other voice type simply because of numbers. Advice for the auditioning soprano would be very welcome. Would also like to know how many sopranos might return from a previous season, making the spots open to newcomers even smaller.

No advice separate and apart from all of the other random things I’ve suggested for all singers. As for the number of returnees, it waxes and wanes in each voice type each year. It’s typical that about half of each year’s spots may go to singers who have re-auditioned for consideration for their second year at Wolf Trap.

Love the blog(s) since the past two years; however, you forgot the two, count ’em two “Ah, quel diners/Griserie” under Mezzo arias….. ;)

Actually, I was afraid I had missed them, but they’re there. (Alpha, under mezzo: Once or twice.) But I did find that I missed one Mi tradi and one O du mein holder Abendstern. Could’ve been worse!

I wanted to agree with your attention to detail advice regarding resumes and other submission materials, though I wanted to point out a funny irony. There were three typos in the “Basic Information” sheet provided by WTOC at the Chicago auditions this weekend. Human error is certainly understandable, but just know that singers are also paying attention to the professional presentation of companies. Please forgive this spotlight of honesty, I only mean to demonstrate your original point.

It was only a test to see if you were paying attention. No… seriously…. I checked the information sheet on my computer and couldn’t find the typos. Then we went back and looked at the printed sheet and realized that we had duplicated and distributed an earlier sloppy draft version… As I tell my son, intention is only part of the equation. Sometimes, follow-through can be everything. It is critical that we follow our own advice, especially if we’re going to be criticizing others.

Do check out soprano Laura Claycomb’s “Young Artist Corner.” She has some marvelously truthful, insightful, blunt yet compassionate things to say to those of you who are considering a career in opera.

Do your favorite accompanist/pianist/collaborator (hard to know what to call us these days…) a favor, and spend some time surfing the Collaborative Piano Blog; especially 10 ways to translate song and aria texts into English. I also love Chris’ list of required personal skills for the collaborative pianist. Truer words were never written: *** A positive attitude*** Ability to get along with most people and to develop working relationships with a wide cross-section of people without confrontation*** Ability to develop working relationships with difficult people** Ability to connect well with people in a limited time-span, ie. a 3-day rehearsal process* Ability to work in more than one language*** An open-minded attitude, and a willingness to try new ideas** A sense of when to compromise and when not to** Ability to become a trusted and respected colleague, with the ability to inspire confidence in others… and more…

See you soon. Enjoy December and those endless Messiah sing-alongs and Nutcrackers. Someday we’ll pass the law that gives musicians a separate holiday, sometime in February.

I’ve been involved in far too many conversations lately where one ends up pining for the Golden Age of yore. One of the theories on the decline in quality of singing at the highest levels is a decline in the talent pool… that is to say, a decline in the available talent at a lower level.

Now, I can’t speak for thirty years ago, but I thought that if the talent pool was changing right now, auditioners who make a tour every year would be the first to notice. Have you noticed any kind of trend in the caliber of singers you’ve heard over the years? In your opinion, is the available young artist talent improving, degrading, or staying the same over time?