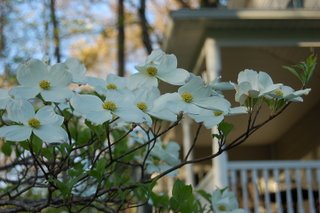 Spring is one of the best reasons I can think of for living in the mid-Atlantic area of the country. The dogwoods are in full bloom. Heading off to the Blue Ridge for the weekend, but first, a long post to compensate for my recent rather cavalier approach to the blog.

Lots of links and references ahead, but I’ve inserted quotes if you’re in a hurry. First, a look at last Saturday’s New York Times article on aspiring artists. I referenced this over the weekend, but here it is again:

The students who are the commercial stars of their class today will not generally turn out to be the artists remembered tomorrow. These anointed stars are much less likely to mature… they get sidetracked and confused and are not giving themselves time to grow and develop.

Again and again we see it. The golden children of high school and college stages, recital halls and studios, sowing despair and envy among their peers. They get the plum assignments and the prime attention of the adoring faculty. Fast forward ten years. They’re not the ones with the staying power.

If you’re a golden child, this isn’t an indictment. There are some who meet success early on who do have their priorities straight and wisely allow themselves room to grow. But those who are riding high at 18, 20, 22 and who succumb to the temptation of believing that all that’s required for future success is replication of their earlier efforts, those who don’t continue to grow because growth involves taking risks and risks bring the chance of failure and failure simply isn’t allowed…

The Theatre Ideas blog closed up shop this Monday. Hate to see it, but I understand the burnout. A couple of months ago, though, he spoke volumes about artist training.

I have serious qualms about undergraduate BFAs and conservatory program. I think the intense focus on… the acquisition of technique, prior to receiving a broader education of the mind and heart is a disservice to the young artist. I think all artists, even “interpretive” artists, need to have a wide knowledge of the world and of themselves before their focus narrows… BFA programs and conservatories, even more than other undergrad theatre programs, are focused too much on the status quo. They tend to “train” student to fit in as smoothly as possible to the way things are done today… The focus is on “training,” not education, and they are equally focused on preparing students to fit into the current theatre, not creating the next.

Which leads me to the “Modest Proposal” that Tony Kushner put forth in his 1998 article in American Theatre.

We should abolish all undergraduate art majors… Any college or university worth its salt tell its undergraduate students that henceforth they cannot major in theatre, the visual arts, writing, filmmaking, photography or musical composition….[and instead] must prepare to spend the next four years of their lives in the Purgatory of the Liberal Arts.

(If you have time, visit the original “Modest Proposal“. Gives you an idea of how drastic Mr. Kushner felt his thesis to be:)

Another Times piece from last winter called “So Many Acting B.A.’s, So Few Paying Gigs.” The link has long since expired, but here’s a clip:

“We’re producing too many people,” Mr. Steele [executive director of the University/Resident Theater Association] said, “many of them poorly trained or moved into the field without the connections or relationships necessary to make their transition to a career possible. It’s as if medical school were graduating people without giving them internships at a hospital.”

Supply and demand, my friends, is not exactly in our favor. The vast majority of actors, artists, dancers and musicians who graduate with conservatory degrees will not be embarking on the kind of careers they imagined. This is not necessarily a bad thing, for many of them will be happier people for it. But does the single-minded focus provided in an arts degree prepare these students? Or are we selling them (and their parents, spouses, and partners) a bill of goods?

OK, I’ll take the unexpected side of this argument.

It’s fashionable to wring our hands about the state of artist training in this country. And it’s far from perfect. But (at its best) it involves discipline, focus, immersion, commitment, and sacrifice. Is that so bad? If, after having participated in the process, the singer becomes a teacher or the actor becomes a social worker, has a disservice been done? I believe not.

Should all aspiring creative artists take a course in accounting? Yes. Should they be able to write clearly and expressively so that their incomes may be augmented through successful grant applications? Of course. Should the BFA and similar degrees be abolished? I’m not so sure.

I’m usually out there in front, leading the charge about not limiting your options and being open to alternate career paths. But if spending four years doing something you love gives you the strength to meet each day with optimism and to greet obstacles with resilience, for godsake, go ahead and do it. Just don’t get sucked up and eaten alive by the neurosis that is music school.

There are limits. Should you stop short of going $100,000 in debt to pursue a passion about which you’re ambivalent? Should you allow your passion for music to obscure the fact that you may not have the “goods” for an international career? By all means, be realistic and honest, if only to yourself.

I have many colleagues who believe that any sign of weakness is a reason to abandon a career. “If you could imagine yourself doing anything other than music, then you should do it.” “If you’re not sure you want to sing for a living for the rest of your life, then get out of it right now.” I understand where that comes from, but there’s so much anger and fear in those ultimatums that it takes my breath away.

Enough of this. There’s opera to be done.

The blog is suffering just a little because it generally doesn’t get written at the office, and I’m keeping a pre-season pledge to not bring the opera world home for a few weeks.

Transposing some arias from Orpheus and reacquainting myself with my Finale software. Trying to get the supertitles and drafts of the pre-show talks done before we’re up and running. Finalizing schedule details for as much of the summer as we can. Union negotiations tomorrow. Wish us all well :)

(Sketch above by costume designer Martin Lopez – for Pluto in Orpheus)

Hi, just stumbled onto your blog. I’m a photography student in Chicago, working towards a BFA in photography. I appreciate your open views to art degrees – there are those of us out here working our tails off, being challenged daily to go above and beyond the status-quo in our medium. Thanks for the post.

Congratulations to Lawrence Brownlee, winner of the 2006 Tucker Award! Tim Page thinks he discovered him, but we remember Larry as a member of the Wolf Trap Opera a few years ago. Keep up the good work in presenting these great young artists.

Tim Page is such a tool. It is Kim Witman who is the great discoverer! She gave us all the gift of seeing Larry with a mop on his head.

What a great summer that was.

I like your open mind of performence and arts. :)