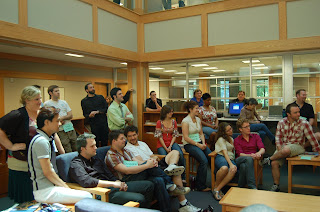 Yesterday marked the return of a WTOC phenomenon from last summer: A Little Lunch Music.

More than a year ago, SSW suggested that we use the common area of our building for a regular lunchtime concert, giving the rest of the Wolf Trap Foundation a chance to see and hear what the opera company is all about. For months I stalled. There’s nowhere to hide from sound in our open environment, and what if the Foundation staffers couldn’t stand a weekly dose of singing at noontime? After all, there are people in this organization (and everywhere) for whom opera is anathema. And I, sadly but unavoidably, spend much of my life seeking not to offend.

I needn’t have worried. If there are those for whom Lunch Music is a bad thing, they’re having the grace to just leave the building and not complain about it. The response has been overwhelmingly positive, from both audience and participants. And I am oh so happy to have been wrong.

Another great thing about Lunch Music is that I’m not in charge of it. Josh Winograde organizes the rep and singers, and he also writes legendary emails telling Foundation staff about the day’s offerings. Here, for your amusement, is this week’s installment:

TO: Everyone
FROM: Joshua Winograde
RE: TODAY!!! “A Little Lunch Music” Returns

We are thrilled to announce that A Little Lunch Music is back by popular demand! We hope you’ll join us today as we start our series of lunchtime concerts by busting out the big guns!!!
Question posed by real English student on UsingEnglish.com… “What’s mean of ‘bust out the big guns’?”

Answer from a real online tutor…
This is a time to get bigger, get down to business, be more serious, use secret tools.

You: “I have a very, very, very hard English question for you.”
Me: “Okay, time to break out the big guns. Let me get my dictionary.”

You: “I feel that we might be starting to plateau in our progress.”
Me: “Oh, time to break out the big guns, hmmm?”

You: “There are all these opera singers running around the building disrupting my last 8 months of peace. Does that mean the Wolf Trap Opera Company has arrived?”
Me: “YES!!! AND WE’RE GONNA START THIS SUMMER OFF WITH A BANG AS WE BUST OUT THE BIG GUNS!!!”

Okay, fine… So I wrote that last one. But you get my point!

Please join us for a lunchtime concert of BIG GUN arias…

Where?
In the Earle Williams Learning Center … come listen from the balcony, the main level, or even your office!

What?
Arias from HUGE, ENORMOUS, GARGANTUAN, MONSTROUS operas so big that we are unlikely ever to be able to present them in a space this intimate again. The operas are BIG, the arias are BIG, and the voices… let’s just say you’d better hold on to your hats!

WHAT???
We don’t want to give it all away, but here’s what you’ll hear this afternoon…

Sometimes (okay, fine, most times) that I enter a room, I play this aria on the CD player in my head. The music that Wagner wrote for Elisabeth’s BIG GUN entrance in the 2nd act of Tannhaüser is, quite simply, the BEST entrance music anyone ever got…
ever…
ever.

Mozart had previously held this honor for the entrance that he wrote for the Queen of the Night in The Magic Flute, but Wagner showed him who’s boss.

Wagner writes Elisabeth’s entrance to illustrate the ecstasy with which she enters this “holy hall” having just emerged from a self-imposed, full-fledged societal withdrawal upon learning that Tannhaüser has returned from Sodom, or was it Gomorrah?

Never mind… as I said, we will never do this opera here, so just enjoy her one solitary moment of happiness. Oh yeah, did I forget to tell you she dies of grief less than two hours from now?

Remember that time you stubbed your toe and it was a whole week before you could wear your stilettos again comfortably?

Well, boo-hoo because King Amfortas has been bleeding from the same magical wound for about a decade.

In act 3 of Wagner’s Parsifal we are finally at Amfortas’s exit music. In this aria, the King prays to his deceased father to offer him relief from his sufferings, and therefore death. Unlike our heroine Elisabeth from Tannhaüser, all ends well for Amfortas, whose exit music is a false alarm… he is healed rather than killed.

Don’t worry, though, the soprano Kundry still shows up 5 minutes later to die of grief again.

Another king … another BIG GUN exit … only this time, sadly, there is no false alarm (i.e. He dies).

King Riccardo, who is either the Governor of Boston or the King of Sweden depending on who you ask… don’t ask… is in love with his best friend Renato’s wife, Amelia.

Unbeknownst to the King, this aria will be his last.

Riccardo has come to terms with his love for Amelia and he plans to set everything right between him and Renato, but Renato didn’t get that message, and he stabs the King.

Cherry on the Top And, as a special treat, we ended up the 20-minute set with a preview of tonight’s Happy Birthday to Two (Bernstein & Bolcom) recital, with”Bruce” – an unforgettable song by neither Bernstein nor Bolcom, but from Bill Bolcom’s and Joan Morris’s cabaret catalogue.

Oh, I am envious beyond belief – that you heard it and I didn’t! Josh is a wonderful publicist.